First Service In The New Space

Well, we made it. After a long few weeks, March 15 came upon us and we found ourselves having our first service in the new worship space. Aside from a few technical glitches (including our Aviom patching randomizing during soundcheck–more on that later…), the gatherings came together really, really well. Feedback from the community has been extremely positive, and it felt really good to be together in our new space. It looked pretty sweet, and sounded rather amazing. To look at the room, you’d think there would be extreme problems with flutter echo, slap-back and a host of standing waves. However, it really sounded good. We have some EQ to tweak, and I think we’ll put the subs back on an aux, but overall, the first shot at the EQ was pretty solid.

The last few weeks have provided tons of material for posts, and I’ll be working through them in the coming weeks. In the meantime, I thought I’d post some photos of the first gathering. You can click on any of them to enlarge. 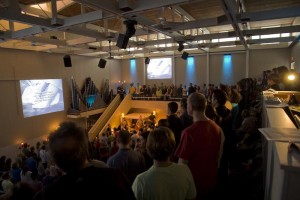 View from the balcony next to the tech booth. Loving the saturated colors of the LED light fixtures. 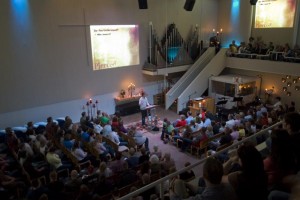 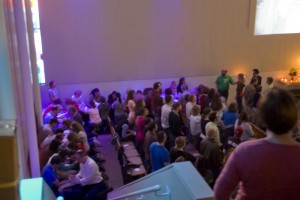 This is our new, much smaller experiential space. We can light it with the wall wash fixtures, which is sweet. 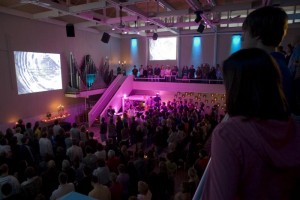 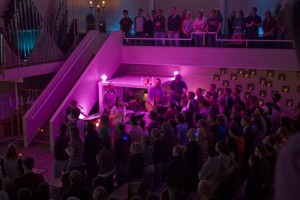 A closer view of the band. The drum condo worked amazingly well. And it’s a nice spot to set lights… 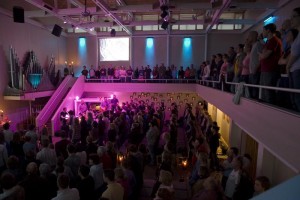 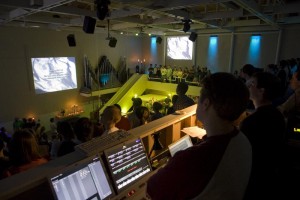 The view from the tech booth. We can see and hear better than our old location; though I sort of wish the front wall of the booth was a bit lower. Then again, we can duck down and hide; so there’s that…Like I said, this is just a taste of what’s to come. In future weeks, I’ll post a full run down of the gear, how it’s set up, what works well, what needs improved on and what we would change if we could do it over. There are a few niggling issues that bug me, but overall, I’m pleased with the system. I tend to be a pretty harsh critic and will focus on the 1 thing out of 100 that’s not quite right. I keep trying to remind myself that we got 96-98% of it right, and that’s not too shabby.

Couple that with the fact that we finished installing at midnight on Friday, and started setup for the first service 36 hours later, and it came off pretty dang well, and we have a lot to be proud of.

I would be remiss if I didn’t mention the heroic efforts of some of our volunteers; Zach and Justin spent a solid 60+ hours with us there last week, and Kevin put in a goodly amount of time, too. Were it not for them, the system would not be anywhere near the state of done-ness that it is (which is probably 95%). And the last 5% is really simple stuff like making mic cords and getting stuff neatened up. So thanks guys! Our community owes you a lot!

I also have to mention our first-run volunteers who walked into a new system, in a new space and knocked it out of the park. Robyn, Tommy and Erik made things run super-smooth (especially Erik who was fighting what appears to be a very confused 01V). Thanks too, to John who came in and helped finish programming lights. You guys rock!