You probably know by now that when it comes to moving stuff, I like wheels. When some of our long lost ancestors invented the wheel, they hit on something big. Yet for some reason, we still insist on carrying stuff. Well not me. If I can put wheels on it, I do. Even on stuff that is built light for easy carrying.

You may have read the post a few months ago on our new stage platforms. I built them out of 1x material so they’d be easier to carry in and out of the sanctuary each week. And they are. However, since we use 5 platforms each week, that’s 5 trips (10 if you count in and out, which I guess you should), and after a long day, the last thing anyone enjoys is schlepping stage platforms down the hall.

There had to be a better way, I though. After a bit of study, here’s what I came up with. The first step was to put four wheels on the back side of the two larger (4’x6’x16″) platforms. After the service is over and we clear the sound and band gear off, we simply stand the platforms up and they’re ready to roll. 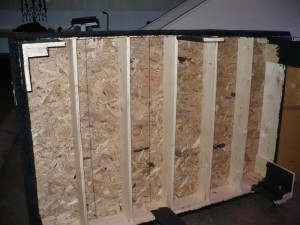 Step One: Stand the platform up on edge–and thus on the wheels. click to enlarge 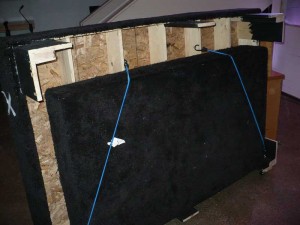 The smaller stages fit right inside, with the help of bungees. click to enlargeThe nice thing about the smaller ones living inside the larger is that it balances them out almost perfectly. I intentionally made the larger platform lean back slightly when up on the wheels so the small platform wouldn’t fall out while being strapped in. With the extra weight of the small one, it’s possible to move them by yourself. Now we’re down to 3 trips to move 5 platforms, and they store in less space than they used to. 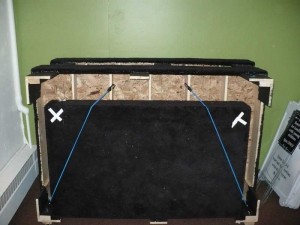 Easy to move, easy to store. What’s not to like?click to enlargeThe set up and take down teams are quite happy with these adaptions. And the wheels on the back force them to set the platforms just off the wall so we have a place to run our cables when we set audio.

That’s it for this edition. I’m off to look for something else to put wheels on…