I have a love/hate relationship with cords. I love making cords, I love designing cable assemblies and I love the sense of satisfaction I get when I successfully wire up a rack and everything works. On the other hand, cords area  nuisance. They seem genetically predisposed to tangle themselves and others together, they wrap around other objects and cause nasty falls. I really wish I could make them, but never have to use them.

While I’ve gotten annoyed by cords in all kinds of applications, the one that wins the prize for most annoying is doing handheld camera work on a crowded stage. Not only are you in constant danger of whiplash and a black eye (when the cable snags and tries to pull the camera off your shoulder), it’s not that hard to pull over a cymbal stand or guitar cab as you’re repositioning. I’ve never do the latter (though I did accidentally kick a 1/4″ out of a DI during a Petra show once–sorry guys!), I have come home with a black circle around my right eye. Yup, camera cables are evil.

And I’ve used them all. By my best, and most recent count, I’ve been stage camera operator for over 200 concerts. I’ve shot with 2 BNCs and a mic cable taped together, 26 pin multi-core and even triax. And even though I had a grip for many of those shows (though only 1 of the grips was any good–I really missed you on the last Alive, Zach!) the cable was always a problem.

There have been wireless video systems around for a while, but they’ve either been of such poor quality that they’re unusable in the real world, or expensive microwave systems that require a crew just to keep them running well. Thanks to advances in wireless data transmission, IDX has recently introduced a product that just might work; the CW-5HD Cam Wave wireless video system. 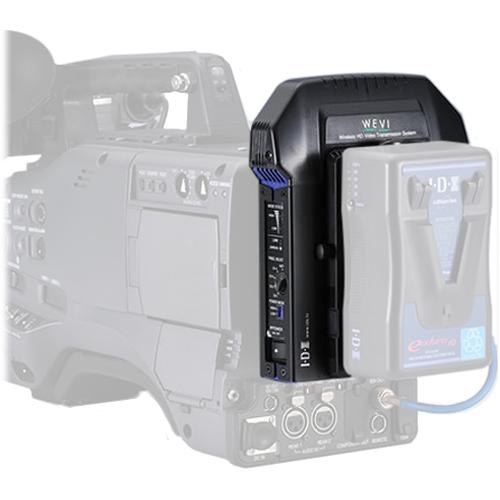 The IDX Cam-WaveI’ll warn you, it’s not cheap (a shade over $5,000). However, it does transmit up to 1080i HD-SDI video with 2 channels of embedded audio 150 feet, line of sight. It operates in the 2.4 and 5 GHz range, so it shouldn’t interfere with wireless audio, and requires no FCC license. It mounts to the back of a camera via either a V-mount or Anton-Bauer mount and weighs about 2 pounds. Since it only draws 12 watts when running at high power, it shouldn’t be too detrimental to battery life. Latency is rated at 1 ms, so the signal should cut right in with other hard-wired cameras just fine. 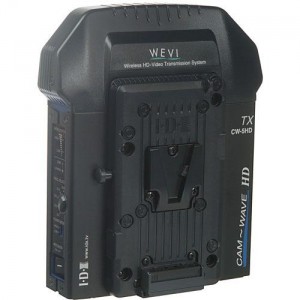 The transmitter fits right between the camera and battery.Now is a tough time to justify spending $5K on a wireless camera system; I get that. And not every church even has a handheld camera on stage, let alone one that’s capable of sending HD- (or SD-) SDI. But this is good news, folks. Ten years ago, I looked into renting a system like this for a shoot. I was going to cost us over $5K for the week. Now we can buy the system for that. In few years, they’ll be down to $3,000 or less, and it’s going to be an easy sell. After all, can you really put a price on not pulling over the lead guitar amp while your cameraman is repositioning during the prayer? I think not.