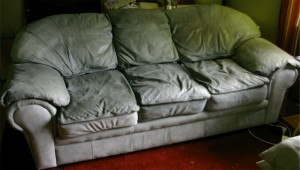 Normally this is a church tech blog. But as most of you know, I’ve been in transition professionally lately. The last few weeks have not been spent doing my normal tech thing. Instead, I’ve been interviewing, looking for new housing, packing and getting my family ready for a cross-country move. These activities, combined with the fact that I’m not producing services at the moment have given me pause to consider how God is at work in my life.

I’ve come to believe we need these times of transition; if for no other reason than to actually have some time to consider God. What I have seen over the last few weeks has been an incredible display of God’s love and care for me and my family–often in ways so subtle that I would have normally overlooked them because of my regular fast-paced life.

The story of my green leather couch perfectly illustrates the point. Two weeks ago, when I returned home–successful–from my SoCal housing hunt, it became clear to my wife and I that our big green couch and love seat set would not fit in the new house. This is the same set that we tried unsuccessfully to sell when we came to Minnesota. And actually, it’s worked out perfectly have them in our current house. But in the new place, they just won’t fit.

So on July 17, I listed them on Craig’s list. My mom was coming a few days later for a visit, and we actually considered where we would sit should the couches sell. “We’ll figure it out,” I said. A few days went by, and nothing. I re-listed them. Got a few e-mails, mostly scammers, but nothing solid. Once my mom was in town, and we had our garage sale, a few more people came to look, but no sale.

Every morning for the entire week my mom was here, I would come out into the living room to find her sitting on the couch drinking a cup of coffee, enjoying the view out the window. I was glad we still had them, but was getting a little nervous about how we would be rid of them.

Someone told us about an organization that collects furniture and household goods for distribution to families in crisis. At first we thought they would come pick the couch up for free; then I learned they charge for it. I was fine with giving it away, but paying for it to go away? I decided to try Craig’s list one more time.

The morning my mom was getting ready to leave, I posted again. A few hours later, I received an e-mail from an interested party. I called. They wanted to come see it that night. Perfect! We had dinner but I didn’t hear from them. It got later and still nothing. Finally, at 8:30, they called and said they were almost to our house. I knew when they walked through the door, the set was sold. Sure enough, they want them both, but have to wait until Thursday or Friday to pick them up. We load the truck on Saturday.

Some might say this is a coincidence. I say it was God. He held that buyer off until the last minute so we’d have a place to sit amongst our many boxes. Other stuff on Craig’s list sold in hours. The couch took 2 weeks–which is exactly how long we needed it. Even as I write this, I’m sitting on our now sold couch.

Francis Chan in his book Crazy Love said that stress and anxiety reek of arrogance. Who are we to think we are that in such control of our lives that we need to stress about things. If God cares for the birds of the air and the flowers of the field, how much more does He care for us? And if He cares for us (and He does), why would we think He can’t take care of all those little details that we get all stressed out about; like selling a green leather couch.