Learning a New Board

Last weekend, we were about 20 minutes in to our stage set up when I realized there was a problem. Our regular FOH guy was not there. He’s been contracted to mix at Coast for something like 20 years, and he’s very reliable. So we called him. Turns out, we had ourselves a little scheduling glitch. That is, we thought he was on, he thought he was not. No one’s fault really; what we had here was a failure to communicate. So we dropped back to plan b. Me.

Now, if you’ve read this blog at all, you know I love to mix. It’s just about my favorite thing about doing tech in church and I jump at the chance to do it when I can. I had been planning to add myself to the schedule, and spend a few hours during the week getting to know the board. So while normally, I would have been pretty excited; instead I was a tiny bit nervous. At front of house sits a PM5D-RH-EX. Basically, it means we have a 5D (with recallable preamps) and a DSP5 on stage. I’ve mixed on a number of Yamaha digital boards and a ton of analog ones, but never the 5D. Yamaha, in their infinite wisdom, designs a completely new user experience with every digital board, so there was not a lot to draw from–at least in terms of the control surface. 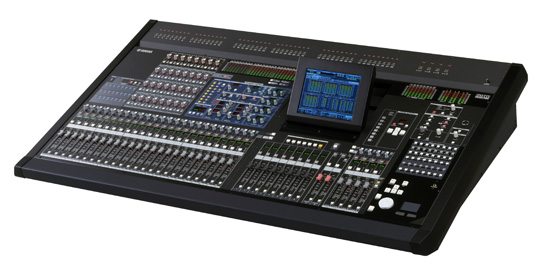 First and foremost, having a monitor guy really saved me (thanks, Phillip!). The fact that I didn’t have to deal with figuring out the surface while getting 9 monitor mixes dialed in was a huge plus. I’ve always mixed monitors from FOH and wondered what the big deal of having a monitor engineer was. Now I know. I no longer take them for granted (or want to get rid of them!).

Second, I realized that I’ve used Studio Manager extensively. And thankfully, Yamaha does keep the interface for their various consoles pretty similar in SM. So, I called up the selected channel view, and whenever I couldn’t quickly find something on the surface, I did it in SM. And honestly, doing a lot of things is easier in SM anyway. Naming channels, patching, routing; even setting gains on the DSP is easier due to the reduced latency of the display (the 5D as a control surface is really sluggish).As the weekend wore on, I became more comfortable with our user-defined keys, the location of select buttons, and the different modes of the encoders. By the 5 Pm service on Saturday, I was feeling pretty comfortable. I even decided to try out a new process for fattening up the vocals and helping them stand out in the mix–a tip I learned from Dave Stagl (but never had enough free mix busses to try). But that’s another post–the next one, in fact!

The point of this post however, is to remind you that whenever you need to learn a new console, remember that all you’re learning is a control surface. Everything you already know about mixing is still valid. You simply need to learn where the buttons are and what the encoders do in what mode. And if you have access to the control software on a PC, your learning curve shortens even further.