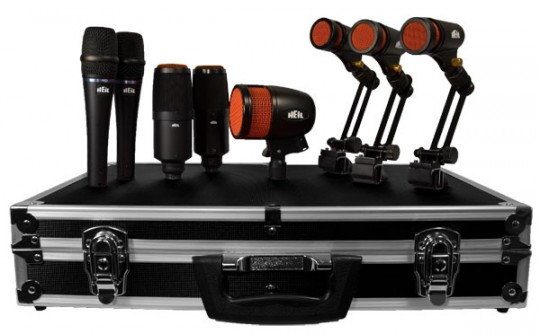 The complete kit. Even comes with a very James Bond-like case.Two weekends ago, I picked up some new mics for our drum kit. We had been experimenting with some demos over the last few months, and I was convinced enough to place an order with my dealer. When I went to pick them up, he gave me the HDK-8 which I initially thought to be more than I needed/wanted. The HDK-8 contains the PR-48 Kick mic, two PR-22 mics for snare and hat, three PR-28 mics for toms and two PR-30s for overheads. They also throw in three of the very unique HR-1 mounts for the tom mics.  I actually just wanted a PR-48, a PR-20 and three PR-28s. I have always used condenser mics for overheads and hat and figured I would continue to do so. My dealer convinced me to try these. I’m glad I did. For this part of the review, I’ll focus on the kick, snare and hat. Later, we’ll deal with the toms and overheads. 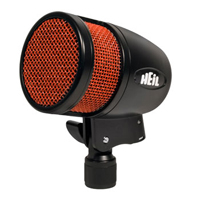 I’ve used a PR-40 in the past for a kick mic and was suitably impressed. The 48 builds on that and is actually a better kick mic in many ways. First, the housing is designed to fit inside a kick. The XLR jack is angled for easy connection. The mic is very compact and fits in a drum well. Finally, it’s shock mounted so it’s very quiet. The frequency response is well tailored to a kick drum and as a result, the EQ on the desk was nearly flat.

We had been using a combo of a Shure Beta 52 and Beta 91 previously. I have found with the PR-48 we get the best attributes of both those mics in a single channel without the negative characteristics of the Shure mics and without the phase issues that you get from multiple mics in a kick.

The PR-48 gives a very meaty thump sound with just enough beater “click” to help it stay put in the mix. I also find we get a lot less snare drum bleed than we used to. Personally, I really like the way it sounds. In our PA, it sounds like a kick drum. Which is pretty much what I want.

I had planned on using a PR-20 on the snare before I got these two in the kit. The 20 and 22 share the same capsule (along with the 28 for that matter). However, the 22 includes an internal Sorbothane shock mount system to reduce handling noise. This is more important when used as a vocal mic; however, when you clip a mic to a snare drum, you’re going to get some vibrations traveling up the  mount into the mic. We demo’d the 20 on a snare and it sounded very good. I think the 22 sounds great.

Again, it sounds like a snare. There’s a good balance of body and attack to the sound, with just enough crack to help it stand out. It’s not at all bright or brash, however. The mic will handle 148 dB SPL of sound, so it’s unlikely to overload on even the loudest hits. As a cardioid mic, it has 40 dB of rear rejection. This means you get a lot less hat and cymbal bleed in your snare track. I’ve normally gated my snares pretty tightly, but didn’t feel the need as much with this one.

Our only complaint so far is that the clip it came with seems more suited for use on a vocal mic than a snare mount. It tends to slide down out of the clip toward the snare unless we tape it in place. Otherwise, it’s a winner.

This is where I feel like I’m breaking new ground. I’ve always used condenser mics on the brass. Though now that I think about it; I’ve not often been that happy with the sound. We previously used a AT Pro37R (and I’ve used Rode NT-5s, SM-81s and a bunch of other pencil-type condensers) and it always sounded thin, buzzy and brassy to me. The 22 on hat was a revelation. The high hat finally sounds like a high hat in the PA. Gone is that annoying ssst-ssst sound we used to get. It’s now replaced with a full, rich sounding set of cymbals.

Bob Heil is a strong proponent of dynamic mics, believing they can be made to sound just as good, if not better, than expensive condenser varieties. On this point, I have to agree. The 22 on hat sounds fantastic. Better, in fact, than anything I’ve ever used. Keep in mind my experience is not exhaustive, but I have used a few. This one beats them all.

So that’s the first half of the kit. Next up, we’ll tackle the toms and overheads. That’s where the fun really begins!