The other day, I led off with the kick mic (PR-48) and the snare and hat mics (PR-22). Today, we’ll tackle the rest of the kit, starting with the toms. 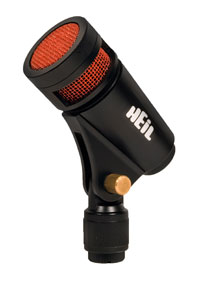 As mentioned previously, the PR-28 shares the same capsule design with the PR-20 and PR-22. The mic body, however, is completely unique. The 28 uses a dual suspension subsystem to keep the capsule isolated from the mic body. When positioning the mic, it can be a little disconcerting when you grab the head because it moves around in the body a bit. At first you think it’s broken, but then realize it’s simply shock-mounted. It’s a great concept, one that I think leads to the incredibly tight sound they produce.

Like the rest of the Heil mics, the toms just sound like toms. There is enough crack on the attack to place in the mix, with plenty of body to finish out the sound. They don’t over-resonate or sound boomy, either. As a cardioid mic, they reject 35 dB at the rear so you don’t get a ton of cymbals in your tom channels.

These mics are very small and compact, and when paired with the HH1 mount, can easily be kept out of harm’s way while still being positioned for optimal sound. 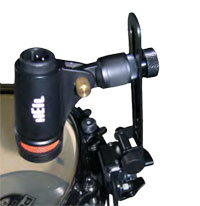 The HH1 is a very flexible and useful tom mic mount.As much as I like the PR-28, the HH1 is a real star. It’s much easier to use and adjust than most clip-on mic mounts. It’s continuously adjustable with in it’s range of movement, so you don’t have to try to balance out various swivel angles to get the mic where you want it. 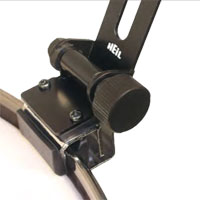 The HH1 can mount to a drum edge or a mounting ring.It doesn’t seem like they would be secure; however, we’ve not had one move. I will be making up some custom cables with right-angle XLRs to keep the profile down. That should make a pretty sweet package.

The PR-30B looks very stealthy as an overhead mic.PR-30 on Overheads

Like the high-hat, I’ve always used condenser mics on overheads. For some reason, I always believed they were the only way to get nice, crisp cymbal sounds. And while I’ve often gotten overheads to sound good, I’m pretty much blown away by the PR-30. Even two weeks ago, before I replaced the processors and re-eq’d the room, these mics stood out as winners. The clean, clear sound they captured made several of us look at each other and say, “What the…those mics are amazing!” Now, with a well tuned PA, I’m still impressed.

We have some really good drummers at Coast. This past weekend our drummer was doing a lot of creative work on the cymbals. Hitting them in different spots, tapping the edges with the sticks, hitting them with his hands…all of it came through perfectly clear. I think that’s the best word to sum these mics up–clear. The cymbals sound like (and I’m saying this a lot in this review, I know) cymbals. If you walk up on stage and listen, then go out in the house and listen, they sound the same–with no EQ on the board (save some high pass to keep the toms toned down).

And that’s really the story. Reading back over this and the last post, it sounds a bit like a manufacturer’s write up. But honestly, I’m really impressed (and I bought the mics with our own money, by the way). I never would have believed dynamic mics could sound so good on cymbals, which probably speaks to my own ignorance and “upbringing” than anything else. However, on almost every concert video I watch, I see condenser mics as overheads, so I guess I’m not alone. And I’m not saying those can’t sound good. On the other hand, I’m so happy with the PR-30 and 22, I don’t know that I’ll go back.

My goal in live sound is to faithfully reproduce the sounds coming off the stage. I feel Heil has given me some great tools to do that. The fact that I am using almost no EQ on the mics at all says a lot (especially when you look at the previous mic’s EQ curves). They just work, and they’re priced reasonably. Check them out at Heil Sound.