Coast Hills has a rich tradition of putting together a great Christmas concert. There is typically a theme, top musicians are brought in, and a wonderful concert ensues. This year, we decided to do something different. We felt God was calling us to tell a compelling story that clearly conveyed the Gospel. After much brainstorming, an idea was birthed. The result was an original production called Gunch: This Christmas Hope is Reaching Out to U! The concept is very loosely based on the Grinch, but is really a story of redemption. All the dialog was original, and we had several original musical numbers written in-house as well. Did I mention I get to work with a great team? At the end of the weekend, over 4,400 people had seen the show, which is roughly three times our average weekend attendance.

I could (and may) write quite a few posts to cover this amazing show, but I thought I’d start off with some pictures. Over the next week or so, I’ll try to write some more detailed posts on how we did a few key things. Along the way, I’ll also share with you why I thought it was the most amazing Christmas production I’ve ever been part of (and I’ve done a few of them…). Without further adieu, here are some pics. 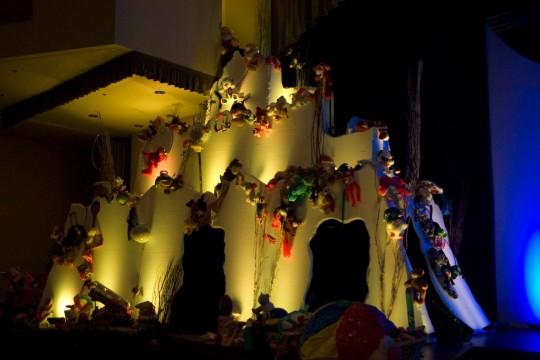 Trash MountainTrash Mountain is where Bobby Gunch lives. He used to be a happy U-Villian before he was thrown out. Now he lives on the piles of trash created by old cast-off toys. Our Assoc. TD, Gary, designed this and many other set pieces. We built the form out of SteelDeck, using 6 foot high legs. We tied 1 1/2″ foam to it with bailing wire then cut the foam with a hot knife to create the shapes. We’ve been collecting toys for weeks, and we tied a bunch of them to the foam with more bailing wire. We left a good pile at the base, on the floor and beside the mountain. It’s up-lit with a bunch of rented ColorBlast 12s. Because it’s all SteelDeck, it’s structural. As such, Bobby is able to walk out on top, climb down a set of steps and move down to different levels. At over 18′ high, it was a rather imposing structure. 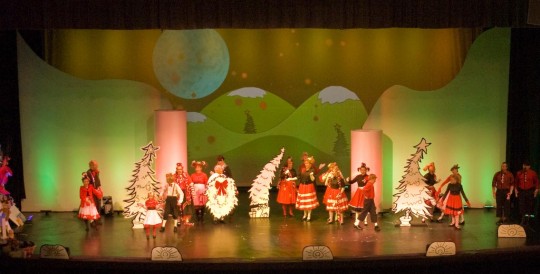 Opening Number; Put the Lights on the TreeWe created a lot of flats for this show using 1/4″ luan with simple 1x and 2x bracing. Rather than try to paint things to look photo-realistic, we chose a more cartoony black and white effect. A volunteer designed all the elements and we cut them out with a jigsaw. She drew them with a sharpie, and we had a small army of people painting over the outlines with black paint. At the end of the day, the flats were light enough to be carried by one person

One other bit of inspiration: The red ribbon on the wreath (upstage, just stage-right of center) was put on during the number by the small girl downstage right. We needed a way that she could quickly stick it on there, but it also had to be removable. Our producer,  Todd, came up with a simple magnetic solution. He glued a piece of sheet metal to the wreath and painted it white. A flat piece of magnetic strip was glued to the wreath and with that, it worked perfectly. Clever thinking, Todd! 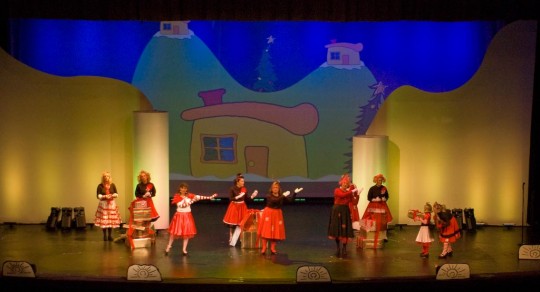 The tall, curvy flats (prosceniums) were made the theater way; 1×4 frames, and muslin stretched, sized and painted over them. The top curves were cut from MDF and fastened to the 1×4 structure. It was a big job to build them that way, and we hated to break them up at the end. Next year, if I have my way, we’ll build them out of 2x4s and drywall. Faster and cheaper. The tubes are 36″ SonoTubes, the kind used for making concrete columns. We wrapped them in white Spandex and up-lit them all with ColorBlast 12s. We also had a row of ColorBlasts above and below the cyc in the back. We projected various stills and videos on the cyc to create another layer of the set. All the costumes were done in-house by our amazing costume crew. 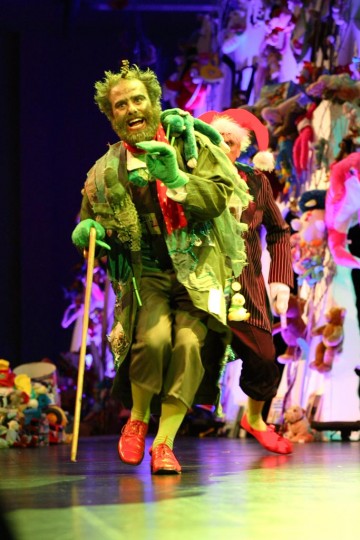 The most complicated costume–Bobby GunchHere’s another costume. The suit was purchased, then cut up and re-done for the character. The level of detail is rich. We had a trick mic’ing Gunch (played skillfully by our Jr. High Director Adam Brown). He changed coats 3 times during the show, and had a beard 3″ long. We ended up clipping a lav to the sprig costuming clipped to his hair right in front. I taped it to the back of his neck (after weaving it through his hair) to keep it in place. I was honestly surprised at how well it worked. The only issue we had was wind noise when he ran across the stage.

As I said, I’ve got lots more to share. Stay tuned for more!