As promised, here are some more shots from the Christmas Production. If you missed the earlier ones, you can find them here. 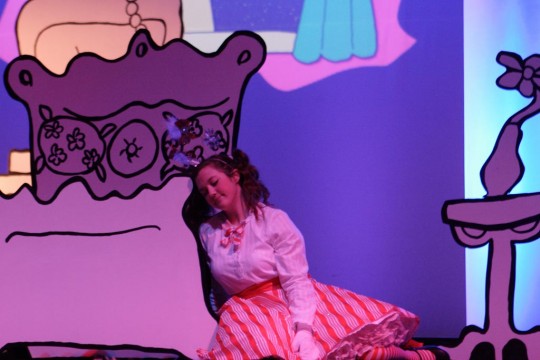 Lindy was a main character in the show; this is her room.One of the things we tried to do was create depth on the stage using basically flat objects. Her “bed” for example, is two pieces of 1/4″ luan with simple brace stands. The flower on the table is also luan. This scene plays in front of the proscenium, adding another layer. In the opening, we put a “dresser” (also luan). Behind the dresser, we projected a window on our cyc. It was all very simple, inexpensive and very effective. 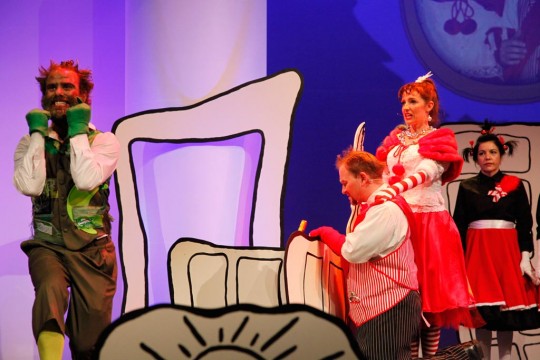 The Mayor’s OfficeAgain, the use of luan for flats. In the foreground is a simple shape that depicts an old stage footlight. It’s one of seven, there to conceal the stage monitors. The “desk” is a simple table we bought from Ikea and zip-tied two pieces of luan to. The “window” is held up by two cast members when it’s needed as a window. We weren’t afraid to show people moving things around the stage, even during “blackouts.” Sometimes, cast members would carry out a prop or flat, set it down, then carry on with the scene. It worked quite well. 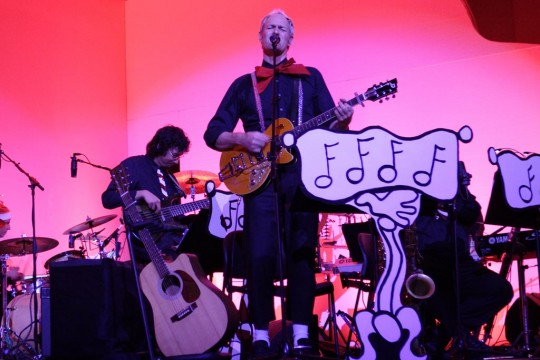 The band area.We even brought some whimsy to the band. We had some flats made up to dress up the music stands, and zip-tied them to the real music stands. It was just one more layer to sell the visual concept. Behind the band, we built a wall of flats and foam cut with a hot knife. The entire corner was up-lit with more Color Blasts. Putting the band in a corner was great for the stage, but it made things tough acoustically. We ended up with a lot of monitor spill, which occasionally made it tough to hear dialog. To fix that, we had to drop instrumentation out of underscores, which we hated to do, but had to. If we do something similar next year, we’ll address this earlier and better. 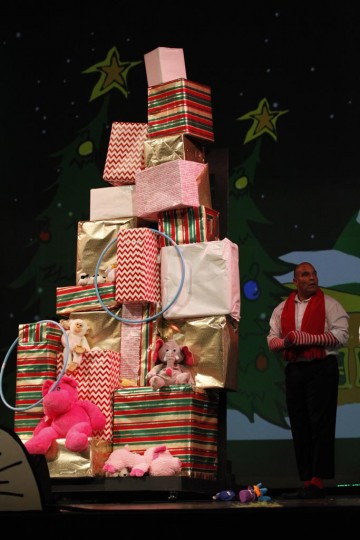 Toy MountainAh, Toy Mountain. This was an interesting challenge. The script called for a scene in which the whole town came together in the town center near a pile of toys that the kids no longer liked. The pile needed to collapse on Gunch at a certain point. This posed a whole series of challenges. First, how to you put together a pile that will fall, but be easily reset? Next, how do you transport that pile? How do you tip it and how do you control the fall? The end result worked great, and was a collaboration between Todd (my boss and overall producer of the show) and me. And I think I’ll save the answers to those questions for another post.