Being in Two (or More) Places at Once

The other day, I had to do a funeral. Now, I generally don’t like funerals; first because they’re typically emotionally hard, and second because they’re technically challenging. Typically, funerals are planned by people who have no idea how technology works and they are always last-minute. Last week’s funeral was all of that, and more.

Because it was on a Friday, at 10:30, all of our volunteers were unavailable. Friday is also our department’s day off, so I was here by myself. Which meant I had to run FOH, monitors, lights and video. No problem! On Tuesday, there was going to be a singer playing acoustic guitar. Easy. By Friday, we had three monitor mixes, acoustic, electric, 2 vocals and they wanted a piano. And there was a special song that needed lyrics, and a video (which arrived on DVD 45 min before service start–ugh!).

The architect who designed our building decided the best way to reach FOH was to go out of the auditorium, across the lobby, up 2 flights of stairs, back across the 2nd floor lobby, into the balcony and down to the tech booth. This tech booth is a good 35 feet wide; video, presentation, lighting and FOH. And someone before me decided that monitor world should be 10 feet in the air on a platform on stage left. Doing all this solo would be a challenge.

So I took advantage of technology to shrink the space. First off, we have a HP laptop that swivels into a tablet set up to run Studio Manager. With this tablet, I can manage  both the M7 at monitors and the DSP 5 for FOH (the fact that I can’t manage the PM5D at FOH is a sore spot with me, and the topic of another post–thankfully most of our FOH work is done in the DSP 5). With the tablet, I could stand up on stage with the musicians and dial in their monitors, then run out into the house and set gain and a rough mix. When it came to the actual service, I shut down the tablet and used our Mac Mini running bootcamp at FOH to run the M7. Thankfully, all that amounted to was turning on and off the monitor mixes. 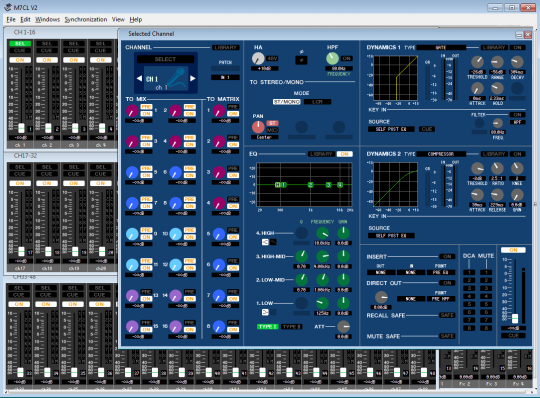 This is pretty close to how I have the tablet set up to run the M7.To make our booth a little smaller, I used one of my favorite Mac features–screen sharing–and a little ProPresenter magic. ProPresenter has a great feature that lets you load an audio track, and pre-program a series of slide changes to it. Basically, once you time it out, you hit play and the slides change by themselves. This worked perfectly for displaying lyrics to a special song (played from ProPresenter, not live). Special music was now one click.

However, the presentation computer is still 15 feet away from FOH, on the other side of the lighting board. To shrink that distance, I screen shared from my MacBook Pro to the MacPro. I set my laptop just to the left of the PM5D. That way, when I needed to fire a ProPresenter cue, I needed to walk a few steps, and I could stay close to the 5D. Since I have complete control of the MacPro, it’s like sitting there, only not.

Technically, the service went well. I had my hands full, but I was able to pull it all off with only one minor glitch (I hate playing stuff on DVD!). If I had a little more time, I would have ripped the DVD to a file and it would have run perfectly.

So the next time you find yourself juggling cats like this, think about using some technology to make multi-tasking easier. Better yet, think about it ahead of time so it is easy when you actually have to do it.