It’s happened to me far too many times. The band finishes up, the pastor gets up to preach, and in the middle of the transition, I forget to hit “Play” on the CD recorder to actually start recording. Or I’ll hit “Play & Record” thinking it’s going start recording, forgetting that you have to hit “Play” again. Or I’ll just plain forget. Perhaps I’m getting old, but I blame it on having to do a bunch of things at once. At any rate, I’ve been searching for a way to automate the recording process so I don’t have to remember to do it. That’s one thing computers are great at doing; repetitive stuff on a schedule.

I recalled a blog post Daniel Murphy wrote over at www.worshiptechie.com a few months back. He was looking to do the same thing with video recording of the services. He hit on something that I had previously not known; that is, you can set up an event in iCal and set an alarm. Well that I knew, it was the fact that the alarm can be an AppleScript. And when the alarm is an AppleScript, you can make the computer do just about anything. He wanted it to create a new QuickTime capture. I wanted it to launch and start a recording in Audacity. Here’s how I/we did it.

AppleScript is a pretty rich coding language. You can get your Mac to do all kinds of tricks if you can figure out the right commands. The script for this one is pretty simple:

There is one “gotcha” in this script. In order for the keystroke to work, you must have “Enable access for assistive devices” turned on in the Universal Access pane of the System Preferences. The script is really simple. The first line identifies the application you want to use, in this case Audacity. Activate launches it or brings it forward. Sending a Keystroke “R” starts recording. The last line tells AppleScript it’s done. That’s it. Easy. Save the script in a easy to remember place and you’re on your way. I also created a stop script. It’s the same as start only the keystroke is “space.”

If you want to use another application, just look for the keyboard shortcuts for starting and stopping a recording and make the appropriate substitutions. If there are none, you can probably create them in the Keyboard Shortcuts pane of the Keyboard preferences in System Preferences.

The next step is to set up an event in iCal to start the recording. Here is an example: 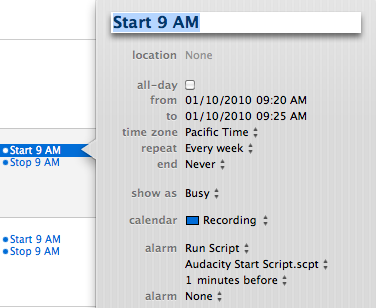 I gave it some generous time on the front and back end of the message time slotNormally, our pastor starts teaching around 9:30-9:35. Sometimes it’s earlier. So I fire the recording off at 9:19. It’s easy to trim the recording in post. Same for the end. Normally, he’s done around 10, but I don’t stop it until 10:20, just in case. It doesn’t cost anything to run it longer, we just trim it up when we’re done. We can also stop it manually if we notice that he’s finished. The script won’t hurt anything if it goes off after we’ve stopped it.

Since we also have an 11:00 service on Sunday and a 5:00 on Saturday, I can set up iCal events the same way. And, by checking repeat weekly, I’m done for a long time.

And that’s it! A few quick steps and we make sure the sermon is recorded each week. Thanks to Daniel for the original idea.