Last week at the NAMM show, there was not a bevy of new equipment. There were a few things of note, however. Today, we’ll touch on a few new products from Countryman. The first is a new earset microphone called the e2. 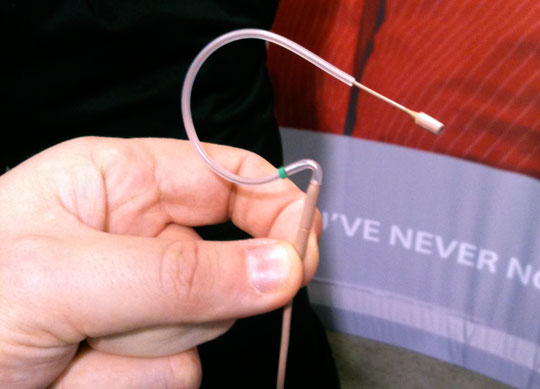 It’s wee-little!The mic is made from material similar to the e6i. That is, it’s much more flexible than a standard e6. The e2 doesn’t have the thicker silicone band around the ear, which was a good decision in my opinion. The boom is very short, and when worn is fairly discreet. Through the use of EQ applied to the signal in the connector, they claim to achieve a frequency response just about indistinguishable from an e6. The e2 is a uni-directional element (as opposed to the more common e6 omni). This leads to a little better gain before feedback and rich, full bass response.

They also came up with a new micro connector that attaches the mic to the cable. It’s similar to the one on the e6, but doesn’t take quite as much effort to break apart. I always feel like I’m going to break the mic when disconnecting the cable on the e6. This was much easier and just felt better. If you’re a fan of the e6, this mic may well appeal to you, especially since it’s much more discreet than it’s larger-boomed brethren. 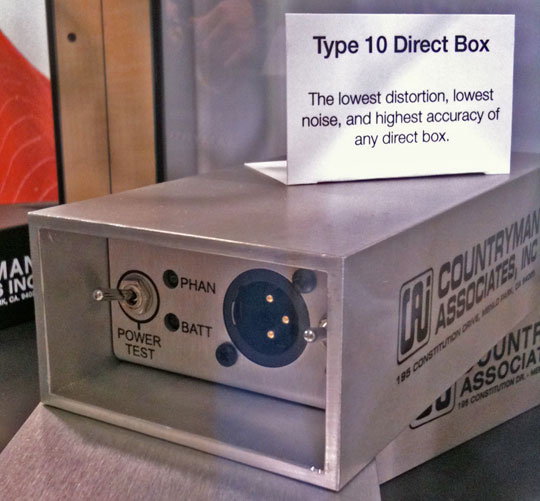 In the legendary tradition of the Type-85 comes the Type-10.The good people at the Countryman booth also showed me a new DI, the Type-10. Their challenge with the Type-10 was to create a DI with the lowest total THD and flattest frequency and phase response of any DI on the market. According to their sales literature, it appears they may have succeeded. It’s flat from 10-50K +/- 1 dB, THD is .005% across the board and phase deviation is under 2 degrees. Not too shabby. They also added a cool power test feature (shown above) so you can check the battery and phantom power status before walking all the way back to FOH. How does it sound? Well for that we’ll have to wait to get our hands on one. Cost-wise, it’s going to run about $50 more than a Type-85, which might well be worth it for certain applications.

Next time, we’ll check out some of DPA’s new offerings.