I had a lot of questions about how we produced last week’s webinar on IEMs. It took a bit of testing and several different bits and pieces of software. The tricky part was getting both audio and video routed to LiveStream in a way that didn’t cause weird internal processing delay echoes. I was able to do the entire project inside my MacBook Pro, with the simple addition of an external screen to make it easier to see what was going on, and make it easier to route the video. Speaking of video, we’ll tackle the video first, since that’s easier. 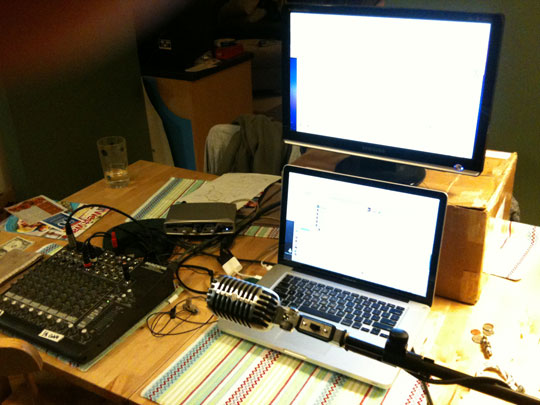 Dave, Jason and I were on a TokBox chat in one browser (Firefox). To get the video from there into LiveStream, I used a free software package called CamTwist. I learned about CamTwist from Nick Rivero and Camron Ware last fall at WFX. Basically, it allows you to take your screen (or a portion thereof—which is what I did) and turn it into a video input that any other software package can see and use. I drew a bounding box around the three of us and and routed that to LiveStream. To make it easier to see, I put Firefox up on the top monitor and Safari ran the LiveStream Studio on the internal display. Video: check.

Audio was a little trickier. At first, I tried to mix the audio inside the box, with sketchy results. I used LineIn to route the incoming mic audio into another package called SoundFlower. That enabled us to internally mix all the audio from my mic and the TokBox for Dave & Jason and send it to LiveStream. The problem was, it created a short delay that we heard in our headphones. It was really distracting (especially for 3 audio guys), so we had to mix outside the box. Perhaps a diagram will help. 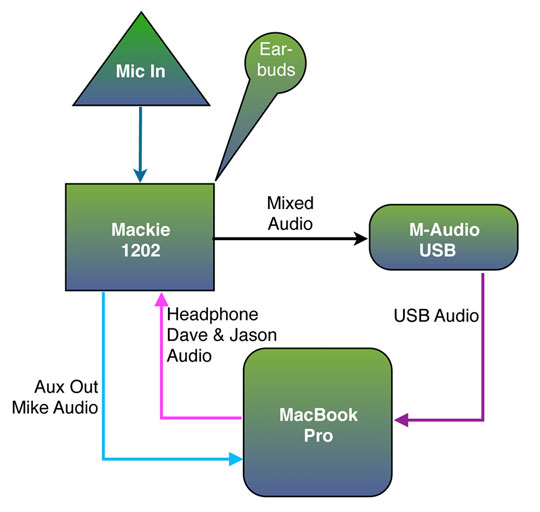 I took the Aux out of the 1202 into the line in jack of my MBP. That was routed to TokBox so Dave & Jason could hear me. I pulled their audio out of the headphone jack into a line in on the 1202. My mic and their audio was mixed together and sent to the M-Audio Mobile Pre USB interface. LiveStream picked that mix up and sent it to the world. I monitored the three of us from the 1202’s headphone jack.

Using the volume controls in TokBox and the mixer controls, I was able to get all our voices set at pretty much the same level. I also used Audacity to grab the USB interface input and record the entire session, which should be up on iTunes by the time you read this (or shortly thereafter).

So there you go. I know we had some issues with the audio lagging behind the video in LiveStream; I’m not yet sure how we’ll fix that. But at least the audio quality was significantly better this time around, and we’ll keep working on improving the process. Thanks for tuning in!