As a longtime proponent of rechargeable batteries, I have gotten into many, uh, discussions of their relative merits. Some people are curious about them and want to learn more. Others are pretty much biased agains rechargeable batteries of any type (except, presumably, the ones in their phones, cars, laptops, cordless phones, PS3 remotes, etc…). In fact, the phrase I hear most often with regard to rechargeable batteries and wireless mics is, “I’ve been burned too many times.” If I had a dime for every time I’ve heard that, I could get at least one, maybe two Venti Signature Hot Chocolates at Star bucks

So based on all that dissension, I decided to do some tests. Now, keep in mind that I’ve been using rechargeable batteries in wireless mics for almost 4 years. I can count on one hand the number of times I’ve had one die unexpectedly on me. Over the last 10 years, I can easily count the same number or more times alkaline batteries have died on me. I know that a good rechargeable battery will easily last one or two services in church. No problem, no worries, I never give it a second thought. But how long will they last when stretched? And how does that compare to a standard alkaline, in our case Duracell ProCells? I figured I would find out.

Here is my test procedure: Figuring that mics draw different rates of power based on the amount of audio they are dealing with, I would try to simulate real-world conditions. I set up a monitor on stage and put 6 mic stands around it. The mcis were identical Shure UHF-R UR2s with SM-58 capsules. Each was set to a +20 dB of gain to get the input stage hitting about where our vocalists run each weekend (without cranking the monitor to a really annoying volume…) 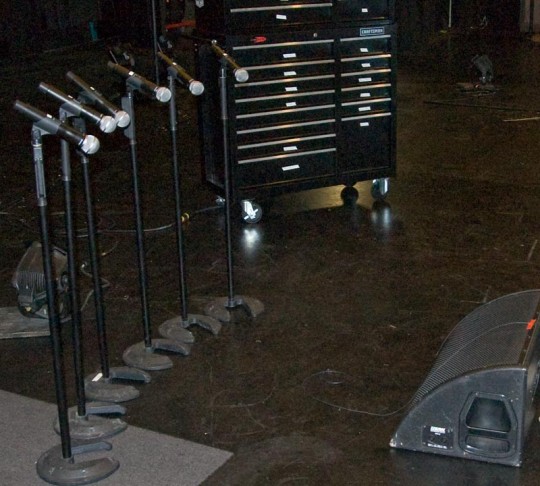 Each mic was placed the same distance away from the wedge and fed a steady diet of sound for the day.I had five NiMh batteries to test: Sanyo’s Eneloop, a low self-discharge battery rated for 2000 mAh; a standard Sanyo 2700 mAh, a Powerex 2700 mAh, my old-standby Ansmann 2850 mAh and a new low self-discharge battery from Ansmann, the Max-E rated at 2500 mAh. Most NiMh batteries will self-discharge pretty quickly if you let them sit around, which is why it’s recommended to keep them on the charge and always go straight from charger to mic. The Eneloops and Max-Es are formulated to retain up to 80% of a full charge after a year of non-use with no charging in between. I’ve used Eneloops for over a year in my digital SLR and can attest to the fact that they last forever. In fact, they last longer than alkalines in my DSLR. Eneloops also deliver a lot more current for a lot longer than most batteries, NiMh or alkaline, so I was curious how they would do. 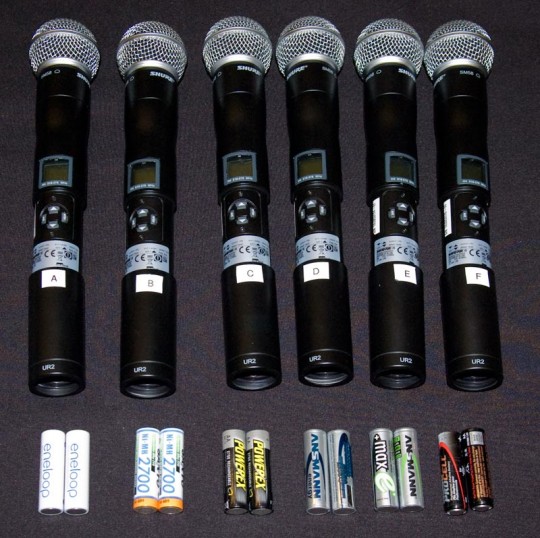 The batteries in question.I set the battery meter on the UR2s to use a NiMh curve for the rechargeable batteries and left the “control” ProCell set to Alkaline. The reasoning behind this is that NiMh batteries (the most common chemistry of decent rechargeable batteries) have a different discharge curve than do alkalines. Whereas an alkaline has a fairly linear drop off of voltage over time, a NiMh drops from full voltage to an intermediate level, holds there for quite a while, then drops off quickly.

Discharge curve of the Eneloop, a Sanyo 2700 mAh NiMh and an Alkaline. I grabbed this from Sanyo’s Eneloop website.A lot of mics don’t have adjustable meter curves, which makes using rechargeable batteries a bit trickier. You have to know how long they’ll last, and change them regularly, regardless of what the meter says. That is the reason most people get burned. They assume that if it says 3 of 5 bars, it’s OK. However, it could easily go from 3 to 0 in 5 minutes if it’s near the end of the charge. The fix, change them before they do that. Easy.

Once I had my mics set up, I had to figure out a way to keep track of the usage. I’m pretty busy all day and didn’t want to keep checking in to see what they were doing. Since UHF-R mics can be remotely monitored by Wireless Workbench, I decided to write an Automator script that would take a screenshot every 15 minutes (then re-name it with the time the shot was taken). That way, I could set it up in the morning, let it run all day and go back over the pictures at my leisure. By the way, the script took me about 20 minutes to write–just one more reason to like my Macs… But I digress). I started about 10 AM and planned on running until about 5:30 PM when I had to re-set for mid-week Bible study. I honestly didn’t expect them to last that long anyway.

Each of the rechargeable batteries had been conditioned a few times before being fully charged and left in the charger for a few days. Conditioning is a function that a good charger can do; the battery is charged, discharged and re-charged again. That makes sure the battery is functioning at the highest capacity. Each battery was in the charger in trickle mode for at least 3-4 days before the test.

So those were the test conditions. How did the batteries fare? Did the rechargeables come close to the capacity of the alkaline control cell? For that, tune in next time–the results may surprise you!

Thanks to our sponsors

I would be remiss if I didn’t mention two companies that made this test possible; Horizon Battery and Thomas Distributing. Both sent a variety of batteries and chargers in for the test. I’ve purchased from both companies in the past and heartily recommend them. David Schliep from Horizon was especially helpful. Also, in the interest of full disclosure and in accordance with new Federal guidelines, I’m required to tell you that Thomas Distributing gave me some batteries and two chargers for this test. That in no way affected the results, or my opinion of the batteries or chargers. I call them like I see them, and I have in the past purchased the same or similar equipment from Thomas.