If you’ve missed the previous two posts on rechargeable batteries, you need to go back and read about the test, and the result. Got that? OK, good. So now we’ve run the test, analyzed the results, it’s time to pick a winner, right? Sure, fine. But let me remind you what didn’t win: The ProCell. It was beat by every rechargeable I tested, including a 4-year old abused battery from home. With that in mind, there are really no losers. However, there are a few standouts. And since we just wrapped up the 2010 Winter Olympics, we’ll hand out some medals. First, the Bronze. 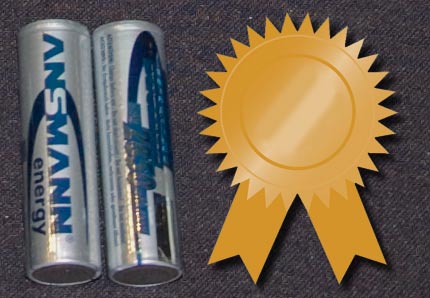 As I said earlier, I was a bit surprised that this cell didn’t outperform the two lower-rated cells that beat it. After all, it has a 150 mAh higher rating. But in my research, I’ve learned that the mAh rating is only a guide for power storage, what we need to know is power delivery. And while the Ansmann 2850 held up well at 13.25 hours, it wasn’t enough to beat the top two. Still, it beat the ProCell by 3.5 hours, which is no small achievement. And one thing I can say with confidence about Ansmann batteries is that they last for a long time; consider the 4-year old abused 2700 batteries I tested, they ran for 13 hours as well. You’d go through a lot of ProCells in 4 years, so this is not a bad choice at all. I now have 8 of these in my inventory, and I’ll be curious to see how they hold up over the years. 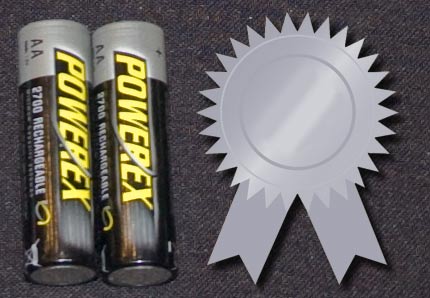 This is a tough call. The Powerex and the Sanyo 2700 both ran to 14 hours. They also have the added benefit of being the same diameter as a regular AA, so they slide in and out of the mics easier (the Ansmann is a tiny bit bigger and sticks in the UR2). Frankly, I would have no problem recommending them at this point. So why the silver? One reason: The Powerex held at 4 bars for 1 hour less than the Sanyo. Now, this may not be completely indicative of the actual voltage drop, and it may well change over the course of 6 months or a year. However, for now, the Sanyo gets the top spot.

In this round of testing, the Sanyo was the standout. It held at 4 bars for nearly 11 hours; over an hour after the ProCell was dead! And it still gave 3 hours of warning before it needed to be changed. I could actually run an entire weekend with one set of these (I wouldn’t, but I could). In fairness, the other two top contenders could do the same; I’d just feel better about doing it with these. They are also the same size as a regular AA, which makes it easier to get into handheld mics. The real test will come in a couple of years when we see if they still hold up as well or better than the Ansmann or Powerex.

Honestly, I don’t think you would go wrong with any of these batteries. The Powerex and Sanyo are $3.12 and $3.19 each, respectively; the Ansmann are $3.62. Over the course of 3-4 years, that cost is academic. Find one you like and stick with it.

Reading back through this post has been interesting. After a year of use, either the Sanyos and PowerExs have grown in size (which is possible), or I was mistaken when I wrote this. Right now, my guys reach for the Ansmanns first because they slide in and out of the UR2 handhelds much easier. The Sanyos are very hard to get out (so much so that we rarely use them anymore), the PowerEx cells are in between the two. I have no explanation for this, other than it is possible the cells have expanded slightly due to the charge/discharge cycle. I recently re-tested these batteries, and found the Ansmann have held up quite a bit better over the previous year.

The rest of the field was composed of newer technology, low self-discharge formulas, namely the Ansmann MaxE and the Sanyo Eneloop. Both performed admirably, however, the top three clearly outclassed them. And really, that’s no surprise. On the other hand, either of these batteries would be great for applications where you need batteries in place for the long-term—they’re rated to hold 80% of full charge for up to a year. I’ve used Eneloops in my DSLR and found nothing compares to them. My Pentax is one of the most power-hungry DSLRs out there (meaning it draws the highest current) and the Eneloops radically outperform anything else I’ve tried; it’s all about matching the right cell to the application.

Next time I’ll go over some reasons why people have had bad experiences with rechargeable cells and how to achieve good results. Stay tuned.

Thanks to our sponsors

I would be remiss if I didn’t mention two companies that made this test possible; Horizon Battery and Thomas Distributing. Both sent a variety of batteries and chargers in for the test. I’ve purchased from both companies in the past and heartily recommend them. David Schliep from Horizon was especially helpful. Also, in the interest of full disclosure and in accordance with new Federal guidelines, I’m required to tell you that Thomas Distributing gave me some batteries and two chargers for this test. That in no way affected the results, or my opinion of the batteries or chargers. I call them like I see them, and I have in the past purchased the same or similar equipment from Thomas.