Good Friday and Easter is a pretty big weekend at Coast Hills, as it is for most churches. For the last five years, we’ve put together a pretty powerful Good Friday service. It’s done completely without spoken words, instead using video, music and graphics to lead people through the experience. This is my first time through it and I have to say, it got me every time. Even though I was crazy-busy all week working on technical details, and mixed FOH for the rehearsal and two services, I was still wrecked by the end of each service.

We laid out a bunch of Steeldeck platforms for the band and vocalists and draped a bunch of fabric all over the stage. One cool visual effect is the use of a white cyc at the very back of the stage, with a white scrim in front of it. In between, we have a large cross with a mockup of Jesus on it. When the scrim is front lit, you don’t see the cross. But when we back light, the cross becomes visible. There are also lights in the cross, and by combining these lights, we can achieve many different looks.

We also project on the scrim, and it goes through to the cyc creating a cool quasi drop shadow effect.

Fabric is a great effect on stage; and fairly cost-effective. By draping simple fabric and using a combination of up- and down-lighting, we got some dramatic looks. Our lighting consisted of our normal truss hang of pars (gelled blue and red), some old Martin 518 scanners, twelve ColorBlast12s hung on the truss supplemented by twelve rental ones on the floor and eight VL-2500s; two in the house, two on the truss and four on the floor.

After Good Friday, we slightly re-arranged the fabric and moved the vocalists downstage. The lighting was a dramatic change between the two services, with Easter being far more upbeat and celebratory. For video, we drop our screen (the cross was also taken down behind the scrim) which also helps change the look. The idea is to keep the stage similar so changeover time is short. In fact, we turned the stage from Good Friday to Easter in under an hour.

Easter starts with a video of the stone being rolled away (complete with sound effects) and rolls right into Agnus Dei. Each song we sung was accompanied by a video with animated words. To keep everything in sync, we sent a click from ProPresenter to the drummer. We used our 4 track QuickTime system that I wrote about last week. In fact, we expanded it to 6 tracks for a few songs; stereo backing vocals, stereo drum or guitar loop, mono sound effects and click. One thing we did find is that ProPresenter fades in the beginning of audio tracks, which was causing the drummer to miss the first few clicks. We fixed it by putting a second of black at the front of each video.

Here are some pictures from the weekend. 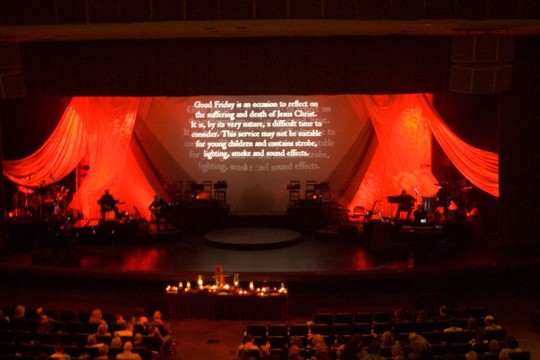 Here’s a shot that shows the projector effect we get from scrim and cyc.

When we light the cyc and don’t light the scrim, the scrim is nearly invisible. We have a few pars on the cross. 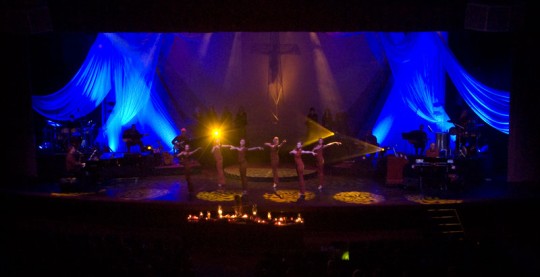 We had a great group of high school dancers. They were always on time, sat around for hours waiting and never complained. 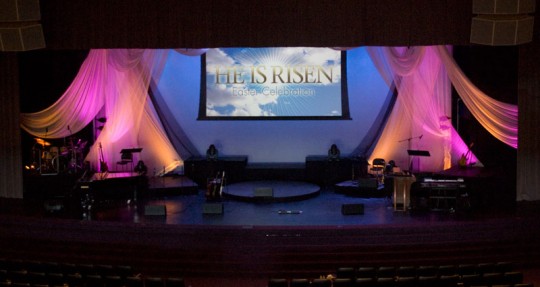 For Easter, the look was much more festive and celebratory. 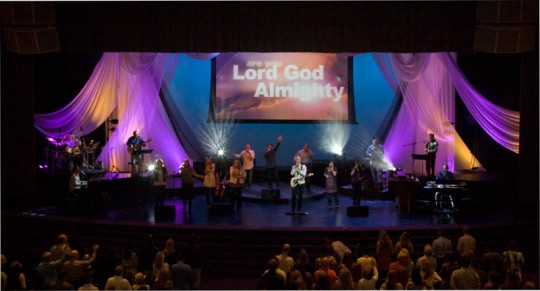 After messing with it all week, my lighting volunteer finally coaxed our into hazer working almost evenly on both sides of the stage.