Those that follow me on Twitter will no doubt know that a few weeks ago we had a large memorial service. And I when I use the descriptor “large,” I don’t mean we had a lot of people. I mean it was large! The final run sheet (yes, we had a run sheet) had 28 distinct elements. The service was programmed to be 2.5 hours long. There were 11 videos and 10 live music numbers. The band/choir had over 15 people; we had 9 monitor mixes out on stage and a tech crew of 5—FOH, Monitors, L1, L2 and Presentation. The family brought in a music director, producer and technical director. There was a crew of 7 setting and decorating the stage and lobby for 6 hours prior to the event. As I said, large. 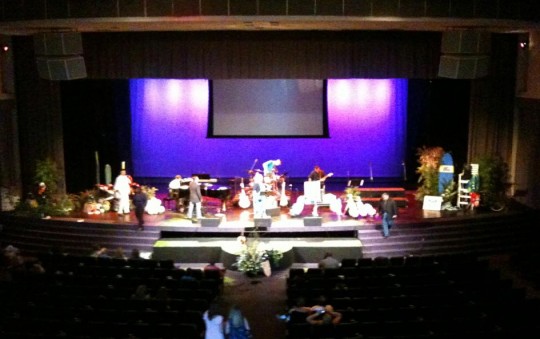 The view of the stage from FOH. It was a very full stage for this one.When I met with the family initially, they started asking about using the stage for displaying various items that meant something to the deceased. I asked, “What kind of items?” “Motorcycles, 4-wheelers, bikes, surfboards, that kind of stuff. And can we hang large pictures from the metal stuff [truss] up there?” At that point, I knew I was in trouble.

We have a set of loading doors that go out to our loading dock; however we currently have a scrim, a cyc and curtain upstage that cover the doors. Using the doors would mean moving those carefully so as not to damage them. That can be done, but I didn’t want them doing it.

Then we started talking about video. They were planning on doing several (it ended up to be 11, which I think qualifies as more than several). I knew I needed to make sure they had the right specs so I wasn’t getting all sorts of crazy video formats.

Then there was the music. Full band, choir, multiple numbers. Again, I knew I needed something the help reign this in (or at least set some parameters. So that evening, I sat down and wrote our Memorial Service Media Guidelines. This document is an attempt to give the family the information they need to produce media for memorial services that will actually work. It also outlines some of the things they can and cannot do on our stage.

A big part of this was for my own sanity. As I wrote in “Funerals Annoy Me,” the big problem I have with funerals is that no one understands how much work it is for the tech department to pull off. So I figured I would establish some parameters so everyone knows what can be done with reasonable effort. Since I set the parameters, I’m OK with whatever needs to happen inside them. If someone wants to go outside the boundaries, I can point to the document and say, “Sorry, we can’t accommodate that.” Since I’ve had the document ratified by leadership, I can veto craziness without fear it will be overturned.

One thing I didn’t include in the guidelines is maximum length of a service. We’re working on that from an organizational perspective to help guide families, and I believe the maximum time should be 1.5 hours. As is the case with most things, less is more. One other item I’m debating putting in there is that during the service there will be no flash photography. At the big one, they hired a professional photographer who shot with flash throughout the entire event (including shots of the audience, which I thought was downright tacky). That may be a personal/family decision, but as a principle, I think it’s a bad idea.

We’re also working on putting together a memorial service cost worksheet, which will be based on my existing outside events cost worksheet. What’s in question is how we discount the room rental and technical staff charges based on whether someone is a regular attender/member versus a friend of a member or someone off the street. Ideally, we’ll decide what the discount rates are, then the memorial service coordinator and I can quickly cost out a service in a fair and consistent fashion.