Why Digico over Avid? 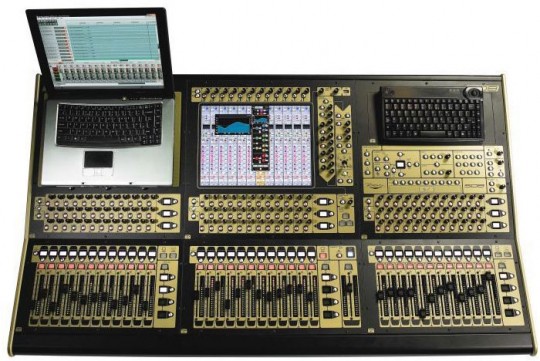 When I posted on Twitter that I was seeing a new Digico SD-8 in our future, several people asked me why I was going that route over a Venue. I started to reply, but the answer was way longer than 140 characters. So here we are. Let me start by saying the Venue is a great system; in fact, up until a few months ago, I was totally sold on it. I know a lot of people who have them and love them, they sound great and the plug-in architecture is mature and solid. Having the ability to do ProTools recording is also a big plus, and I really like their snapshot automation. If the SD-8 didn’t exist, I would buy a Profile and be totally happy with it. Since the SD-8 does exist, however I’ve been tipped that way; and here’s why.

The Venue is great, but it is a bit limited with 24 mono mixes plus 8 matrixes that can be turned into mixes (mostly). For most needs it’s fine, but when you get into needing to do stereo stems for IEMs, you run out of busses really fast. The SD-8, with it’s SFPGA heart beating away, is far more flexible. Need 5 mono and 8 stereo mixes plus 3 mono and 9 stereo groups? No problem. 8 mono and 4 stereo mixes plus 6 mono and 6 stereo groups? No problem. Enter a couple of keystrokes, the board re-configures and you’re ready to go. The matrix is also more configurable, and thus more useful. Each channel can be mono or stereo, which makes much more efficient use of the 36 faders on the surface (12 more than the Profile, BTW). And the entire surface is completely configurable; put any channel, group, mix, VCA or matrix fader anywhere you want. That’s just cool.

The ProTools integration into the Venue system was a huge selling point for me; I’ve been longing for the ability to do virtual soundcheck. The only problem is I don’t like ProTools all that much. I know, heresy. Still, I’ve always found it overly complex and cumbersome to use. And then there’s the general stability issue, their upgrade pricing strategy and that stupid iLock. Really, all I need to do is record 30-some odd channels, and play them back. Because it’s based on MADI, an industry standard audio transport, all I need to record 56 channels is a MADI interface and a laptop. I will use Reaper, a $60 DAW that does exactly what I need it to, easily, and we have virtual soundcheck. To record, I go to the audio set up page, click, “Copy to MADI 2” and all my inputs are routed to the laptop. To play back, click, “Listen to Copied Audio.” Doesn’t get much easier.

UPDATE 3/8/11: This is late in getting updated, but Avid has released a MADI card for the Venue line. This is good news, though I’ve also heard it doesn’t play nice with the Roland S-MADI Bridge (this is unconfirmed, but I have it from a good source). END UPDATE

The Venue software is great. Really, I do like it a lot. However, because the SD line is built around a 15” touchscreen (single or multiple, depending on the product), the interface is designed for a touch interface. iPad mixing anyone? Yea, I know you can mix a Venue on an iPad, but their software is designed be navigated with a mouse, not a finger. There is a difference. I’ve spent hours and hours in both the Venue software and SD-8 software, and for me, the SD-8 is just easier and faster to get around in. I love their snapshot automation, particularly the editing of snapshots. After fighting Yamaha’s scenes all during Easter week, I can’t wait to be able to quickly and easily edit all my snapshots with a few clicks. Another selling point is that the SD-8 software runs on my Mac perfectly using Parallels and Windows 7. The Venue software does not. Nor does the latest version run in XP in Parallels or Bootcamp. That’s a problem for me and Avid’s answer to my problem was, “Get a PC.” My answer was, “No, I’ll get a Digico.” The SD-8 also allows multiple remotes for the desk. So I can have a Mac Mini sitting at FOH running the control software, and still grab my iPad or laptop and wander around and mix without disconnecting the one at FOH. Plug the desk into a wireless router and it’s accessible easily. That could be a problem in some circumstances, but for us it’s a huge feature.

With the recent release of the Roland S-MADI Bridge, the SD8 gains access to the best personal mixers on the market, the M-48s. These take personal mixing to an all-new level, and could be reason enough to choose the SD8 over a Profile. The PQ system is good; for what it is. However, it’s simply no match for having a 40-channel mixer in front of each musician that is completely customizable for them and them alone. The addition of the M-48s makes the SD8 hard to beat in this price range. END UPDATE

When I priced out both systems, the SD-8 came in slightly lower. With more flexibility, the new Waves integration (coming soon, I’m told), and not being locked into proprietary formats from a company not known for exceptional service (sorry, I’ve known Avid for a long time–it’s well known that their service is not great; and Digidesign is becoming more Avid-ized by the week), I’ve moved over to Digico. If you look in the trade rags, you’re starting to see more and more churches and tours going with the SD-7 or SD-8. The SD-9 is a very cool small desk as well, and the show files are compatible across the entire SD line. The interface is also the same, something that Avid also does well (and Yamaha does not). The Venue is also 5-6 years old, and in computer years (make no mistake; when you buy a digital console, you’re buying a computer) that’s a long, long time. With Digico, I feel like I’m getting the latest hardware with software that is easier to use.

There are some other things as well, such as having 3 encoders per channel strip instead of 1, quite a few more dedicated and flexible controls, the ability to lock down parts of the system for volunteers, and of course, that gorgeous 15″ touch screen.

I still wouldn’t tell anyone the Venue is a bad system or a bad choice. If you like it, by all means buy it. I would suggest, however, before you do, take a look at the SD-8…