Last week at the SoCal CTDRT meeting, we had the opportunity to try out several IEMs. The goal was to have products from Shure, Sennheiser, AT and AKG there. AT’s shipping department messed up and didn’t get us product until the day after the event. And AKG, well, we’re not sure what happened to them. I’ve yet to see anything. Listening to the units was instructive, but I felt it was time to do a little more thorough review. So that’s what we’re going to do here.

As I said, AT finally got some product to me, in the form of their relatively new M2 and M3. We’ll hold off on the PSM900 and Sennheiser 2000 series until next time, but we’ll include the G3 in this round. As for AKG, well, they “coulda been a contendah…” I think what I’ll do here is put up the objective data, pictures and audio for each unit, then wrap up with some observations and conclusions. Three posts–I’ve got another week covered!

Because I forgot to take pictures of each individual receiver before packing them all up, let’s start off with a comparison of each. 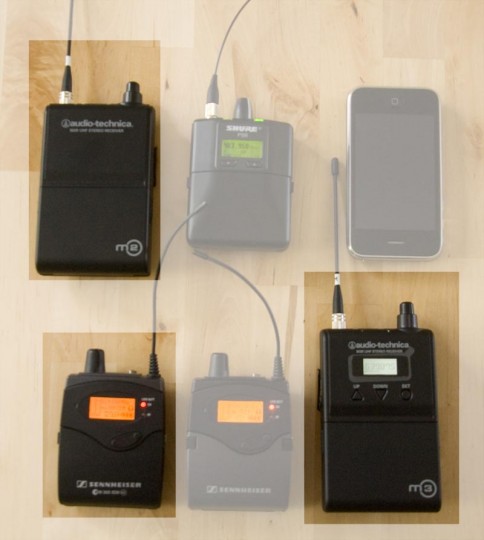 Two of these things are not like the others…Right off the bat, you can see a few subtle differences here. And no, Apple has not released an iPhone-based IEM (though that would be cool). The M2, upper left and M3, lower right, are significantly bigger than the Shure or Sennheiser products. As in, 1980’s bigger. I’m not sure what was going on there in the AT labs, but it’s possible their industrial designers haven’t actually seen a wireless IEM in the last few decades. You’ll also notice the AT antenna design; it’s really straight and stiff, while the others flop around. In practice I’m not sure if this is a big deal. I didn’t notice much discomfort wearing any of them. However it could be an issue for some. So now that we’ve discovered the AT packs are positively huge, let’s get on with the review.

The M2 is AT’s value line. You can buy them for about $599 online, which in the grand scheme of things, isn’t too bad. It’s about the same as a Shure PSM200. As we’ve established the pack is big. It’s also made of plastic and doesn’t feel very solid or durable. I didn’t drop it on the floor, but I wasn’t anxious to do it, either. The transmitter comes with a front-mounted fixed antenna. For the price, I guess a BNC remote mounted one is out of the question. On the face of the transmitter is a simple, 6-LED meter, 3 for left, 3 for right. 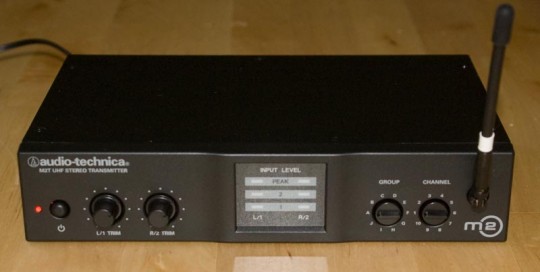 It’s all about value engineering…The meters are cleverly labeled 1, 2, Peak. In practice, 1=”signal present;” 2=”good signal;” 3=”too much signal.” Note to AT; numbers that actually mean something are more helpful than those that don’t. On the left side, is a Power LED and Power Switch; just to the right, individual L/1, R/2 gain knobs. The M2 can be put into a dual mono mode which can give the musician a simple “More Me” mix, hence the 1 & 2 designations. I used it in stereo. On the right side are the aforementioned fixed antenna and group and channel selectors. You can choose from 100 different channels, and AT says you can use up to 10 systems at once. Not too shabby, really.

More than you’d expect back here.The back is surprisingly professional for a value product. XLR/1/4″ combo inputs with 3-position attenuation switches get signal into the unit. XLR loop-through jacks get it back out. The unit is powered by a wall-wart, but it’s small enough to fit into most rack power strips without blocking more than one outlet. Kudos for that design, AT. 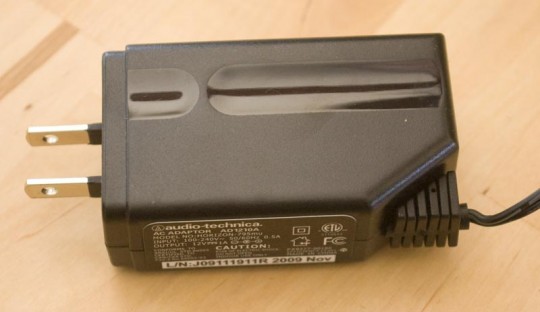 Finally, a wall-wart that doesn’t gobble up 2 outlets.The receiver has just 2 LEDs on it for RF and Audio. A dual-concentric knob adjusts volume and panning. The pack is not particularly heavy, being made entirely of plastic. Besides the size (which is huge, have I mentioned that?), the battery compartment is very awkward. I had to really struggle to get batteries out, nearly breaking a nail in the process. As sound guys, we know how important good-looking nails are, so this is unacceptable. Physical design aside, how does it work?

Surprisingly well. I had low expectations of this unit, and I was glad to say, I was wrong. The overall sound quality is excellent. Stereo separation was good, there was a fair amount of detail in the sound, perhaps a bit bright, but not annoyingly so. Overall, it was very listenable. As for range, that was a bit of a letdown. I wasn’t surprised given the stubby, 1/4 wave antenna. To test range, I walked out my front door (all tests were done at home in my dining room) and walked down the street. I barely got 100 feet before the sound started breaking up. Since the pack was on my back (facing the transmitter), I turned around; it dropped out almost completely. So if you have a big room, don’t put these at FOH while the musicians wear them on their back pocket. Put them upstage and you’ll be fine.

The M3 is the M2’s big brother. They obviously share similar components; a 1/2 rack transmitter (with included rack-mount hardware on both models), similar receiver, and the both come with the same cheap ear buds (they’re rubbish, buy some real ears). Whereas the M2 has a front-mounted 1/4 antenna, the M3 uses a rear BNC mounted 1/4 wave. This means the M3 can be fed from a larger paddle antenna, or through an antenna combiner (AT recently released one, though another manufacturer’s would work as well as long as the frequencies match).

The M3 has a much more useful display.As you can see, the M3 has a much more useable display. The multi-segment level meter provides more than enough resolution for good level-setting. A front headphone jack is included for listening to the input. There are far more extensive menu controls for adjusting the audio and RF sections. This is clearly a product aimed at the professional level user.

Same as the M2, except for the antenna.Whereas the M2 has a single level limiter, the M3’s is selectable in 3 steps. M3 users can select from over 1,300 channels, and 16 units can be used at once. 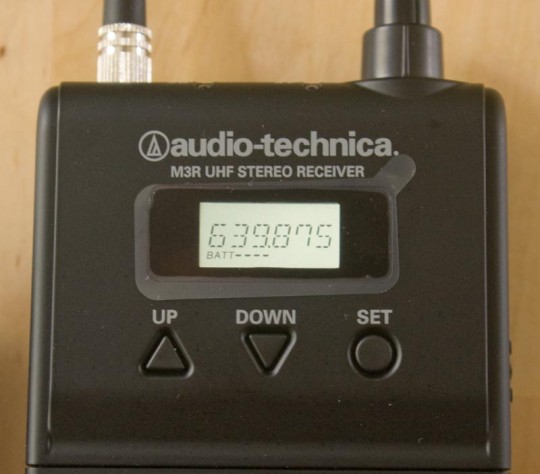 A somewhat more useful display.The display shows frequency and battery level, and using the front buttons the user can select options such as mix mode (Personal Mix, Stereo or Mono), limiter settings and other features. Like the M2, a dual-concentric knob controls volume and panning. The M3 receiver also has an auxiliary 1/8″ input on the side of the receiver for an ambient mic or click track. I don’t know if this is the best spot for it, a right angle plug would be pretty much necessary otherwise it would likely be sheared off.

Again, the receiver is all plastic and shares the same poor battery compartment design as the M2. It also sounds really good. In fact, in practice, I really didn’t notice much difference in sound quality between the two, which is either good for the M2 or bad for the M3. Either way, they were both perfectly acceptable from a sound-quality standpoint. The M3 can be had online for about $799. Personally, I’d say it’s worth the extra $200.

I was really interested in the G3 because I’ve heard good things about it, and until Shure released the PSM900 in March, there was really no competition in this price point (aside from the ATs, which I hadn’t considered until this shootout). Back in January, if you had asked me which IEM I was going to buy this summer, I would have said the G3. How does it stack up? let’s take a look.

A very useable and informative display.The front of the G3 transmitter is dominated by it’s display. It’s packed with information and is easily seen under most lighting conditions. One great feature is that the display background turns red when you hit it with too much signal; nice touch. They have included a simple built-in EQ for some minor tone shaping, and you can operate the unit in diversity mode. That’s a bit of a gimmick, however. The headphones cable becomes the second antenna, and for true diversity operation, the two antennas need to be apart by a few feet at least. I guess this may save you from an antenna that snaps off on the pack, but that’s about it. 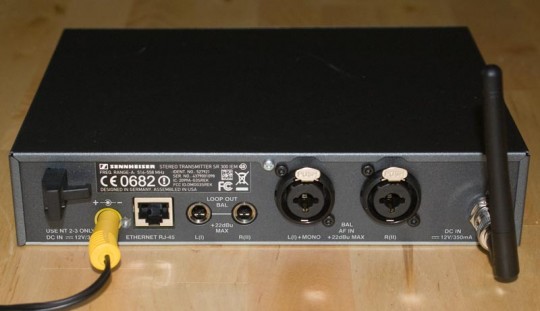 Standard fare, except for the network jack.Out back, we once again have XLR/1/4″ combo jacks for input, and 1/4″ jacks for loop-through. The input level is adjustable through the menu. Sennheiser provides a 1/4 wave stubby antenna, which could be replace with a remote paddle or antenna combiner. One thing significant at this price point, is the inclusion of a network jack. Plug this into your network and you have full access for set up and monitoring through Sennheiser’s free software. That’s a great feature that more companies need to adopt. It’s 2010, folks. It’s a networked world. 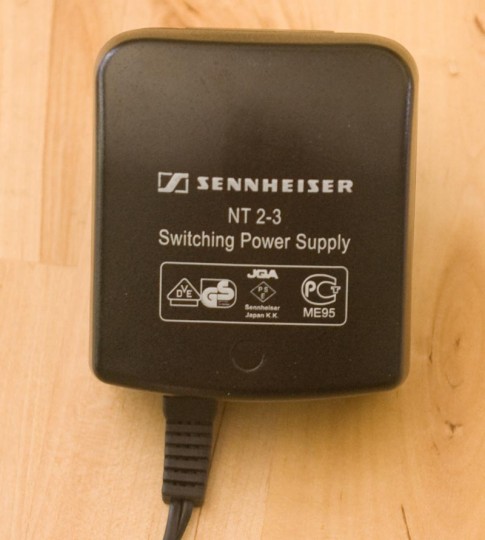 Sure it’s universal; universally annoying!One of the things I can’t stand about the entire G2 and G3 series line is the NT 2-3 power supply. Sure, you can swap out the plug-in part for US, European and other world plugs, and it’s auto-ranging. It also eats up at least 2 if not 3 plugs on any power strip or Furman, making powering a rack of G-series wireless a real nightmare. 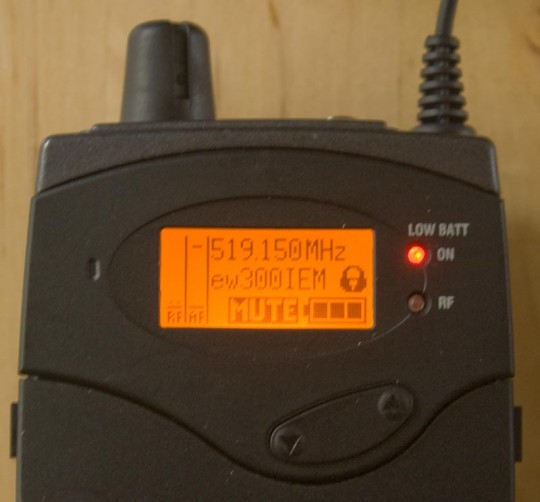 Lots of information in a small package.The display on the bodypack is almost as complete as on the transmitter. You can name it, view frequency, RF and audio level, mute status and of course, battery life. The menu system also auto-locks so musicians can’t inadvertently re-set their channel or group or break anything else. As we saw from the first picture, the pack is considerably smaller than the ATs. In fact, if you’ve used any of the Evolution G-series wireless products over the years, the pack will look and feel very familiar. It’s made of sturdy metal and has a reassuring heft to it. Batteries are easy to get in and out and all controls operate with German precision.

The G3 300 system (receiver, transmitter, rack mount kit and ear buds) retails online for around $1000. I didn’t get to test the included ear buds, so I can’t comment on them. I did plug two different sets of phones into the pack for listening tests. The first thing you notice about the G3, even before putting signal to it is the rather high noise floor. There is a constant white noise hiss at any volume setting. With program material, it’s not quite as noticeable, but you have this constant sense of noise, even if it’s subconscious. The sound quality is good, better than our old PSM600, though perhaps not quite as detailed and spacious as the M3. The overall sound quality feels somewhat compressed and small; it’s not terrible, but having heard other options, I was less excited about it. Range was nearly double than of the ATs, and better than what I’d expect from a 1/4 wave stubby. If you want real performance out of any wireless system however, you really need to invest in paddle or other external antenna systems. (By the way, I should point out that when talking about RF systems, the plural of antenna is antennas. Antennae are found on various bugs. A lot of people seem to confuse that. Rant over.)

We’ll call this a wrap for now; Wednesday we’ll look at the Sennheiser 2000 and Shure PSM900. Friday, I’ll post audio samples recorded from the beltpacks and summarize my conclusions.