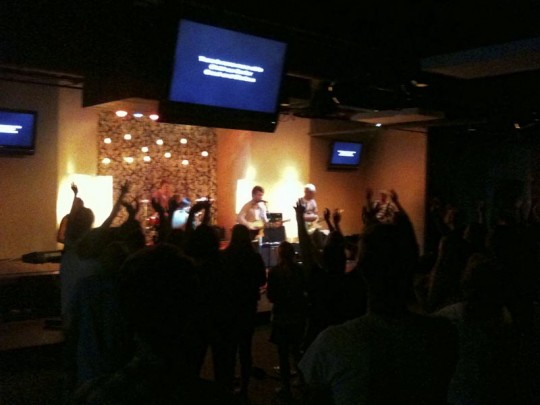 Much has been written on the topic of excellence in the production of church services. In fact, it’s been written about in this very blog. As a recovering perfectionist however, I’m beginning to revise my view of excellence. Some define excellence as perfection; in fact, one church tech I know said if the service wasn’t perfect (from a production standpoint) it was not any good. That is a pretty loaded statement. Perfection is almost unobtainable if you really get down to it, and if that’s our goal, we are destined to be disappointed every weekend. And that’s why I don’t define “excellent” as “perfect.” Indeed, I’m moving away from the whole “excellence” thing altogether.

The reason I don’t pursue excellence as hard as I once did is because it’s such a moving target. To pursue excellence often means we have to keep upgrading our equipment, our techniques, our people. There’s nothing wrong with that; I think we should be in the process of steady improvement. But when that constant pull of trying to improve overshadows the message we’re trying to communicate, we go off track.

My boss and I were talking about this some months ago and he summed it up very well, “We’re not trying to create a perfect service; we want to create a powerful service.” That is a subtle distinction but it’s an attitude shift that has far-reaching consequences.

For example, if my goal is a perfect service, every aspect of production has to be spot on. Every camera shot, every ProPresenter cue, every light move and every EQ of every channel. By necessity that means highly trained (and probably paid) operators at every station. The pressure to perform is high for every operator. If just one thing goes wrong, the goal is missed and everyone is disappointed.

On the other hand, if we’re shooting for powerful, a lot more effort is directed toward planning the service so that the message of the Gospel is clearly communicated. Each element is carefully thought through so it will bring people into a closer relationship with Jesus. When it comes to execution, people are very willing to forgive minor technical errors as long as the overall service is engaging and, shall I say, powerful.

Now, you might be tempted to think that I am lowering the standard and that will lead to people leaving the church in search of a “better” experience. However, I would argue the opposite is true. I believe we are entering a new era in the Church, one in which people are seeking authentic experiences, experiences that will create a difference in their lives.

I’ve been in many church services that were “excellent” at least from a technical standpoint, however I don’t remember many of them. What I remember are the ones that were powerful. Some time back I wrote about my experience mixing for our Sr. High winter retreat. The PA was rather cruddy, the room was small, projection wasn’t that great, and the services had multiple technical glitches. They were also some of the most amazing, powerful services I’ve ever been around. I remember one in particular where God moved in such a tangible way that even after the service “ended” students stayed in the room; some were praying, others were thinking, some were weeping. The presence of God was so powerful, none of us wanted to leave that place. As I write this, 8 months removed from that night, I can still feel the emotions of that moment. That was a powerful service. Students were changed, broken lives were made whole. Those are the kind of services I want to be a part of.

And that’s why I’ve backed off on the whole “excellence” thing. I’m not going to be distracting on purpose, but I’m not going to lose sleep over a missed cue. We need to focus on engaging the hearts of the people in the pews, and hold off on perfection–at least on this side of heaven.