ProPresenter for Windows is Out

In case you hadn’t noticed, last week Renewed Vision announced that ProPresenter 4 is now available on the Windows platform. Development started was announced early this year with a target release date of summer (UPDATE: Apparently the project was actually started last year). Technically, the Autumnal Equinox was Sept. 22, so with a release date of Sept. 21, they made summer. In fairness, it was a total re-write of the code base to make it a Windows app, so I guess we can cut them some slack.

The first thing you’ll notice when downloading the Windows version is that it’s BIG. As in 7.3 times as big as the Mac version. The Mac version has been running around 17 megs, while the Windows install package weighs in at a whopping 123 megs. A big part of the reason for this bloat is that the installer comes with Bonjour Print Services for Windows, QuickTime for Windows and PowerPoint Viewer. ProPresenter relies on all these technologies and I think it was a good decision on their part to bundle all the necessary installs in one package. I’ve installed many Windows packages that require me to download several other components and install them separately; this is a pain. Renewed Vision’s approach is better. Give the user a single (albeit large) download and a single (though multi-faceted) install process, making sure they have all the components they need right away. Of course, like all good Windows installers, I had to click through a seemingly endless series of dialogs indicating that yes, I did in fact want to install the software I just said I wanted to install. Really. Yes. Next. Please let it be over…

Once the 17.6 million .dll files were installed, Pro4 booted right up. And remarkably, it looks a whole lot like the Mac version. In my opinion, the Windows version looks a little clunky, but that’s mostly due to the Windows interface conventions. Whereas everything in the Mac version is smooth and polished, the Win version looks a bit chunky and Fisher-Price. But that’s as much a typeface and icon shape choice any anything else. The reality is everything is there, in the same spot and works just like it does on the Mac side. So that’s a good thing. 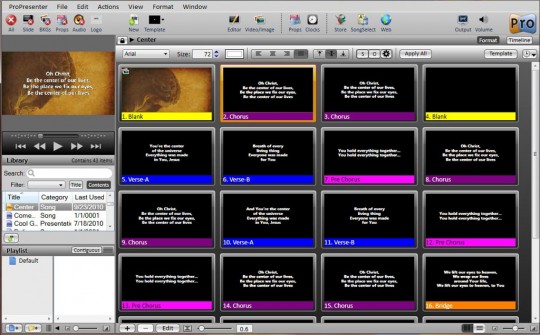 I don’t like the typeface, or the chunky icons in the format bar, but it is ProPresenter 4. 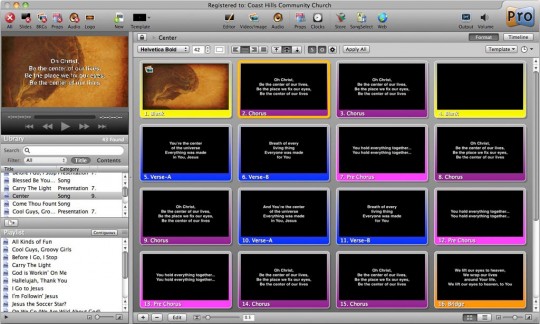 Easier on the eyes, but otherwise identical to the Win version.I can’t fairly comment on performance because I was evaluating the software in Parallels on my MacBook Pro. It felt sluggish in there, but that’s to be expected when running a program like ProPresenter in emulation. I would expect it to be perfectly acceptable on an actual PC. One thing I did notice that I suspect will be true even on a real PC is that the cross fades between slides is very similar to what it was in version 3. That is, there is a slight dip in the luminance level that is particularly noticeable when you have two slides that are the same (a chorus repeat, for example). This was always an issue in 3, and existed in early beta versions of 4.0. By release date, 4.0 for the Mac had a completely seamless dissolve even for identical slides. I would expect the guys to have this corrected in a future update. 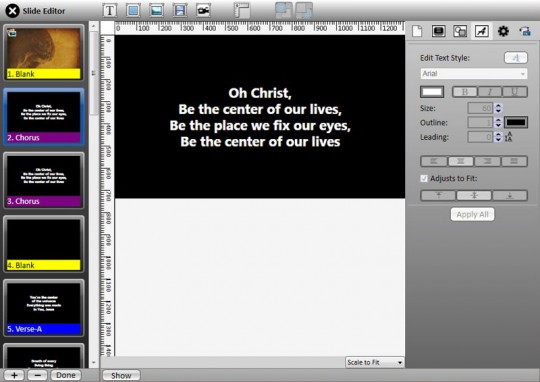 See what I mean about the icons? Still it’s fully functional.As I’m running in emulation, I didn’t do a complete feature for feature comparison. However, everything I did check appeared to be there. All in all, they’ve done a fine job taking the premier Mac-based presentation platform and moving it to another OS. The weirdest thing for me was getting used to holding down the Control key to do things that I would normally use Command for. 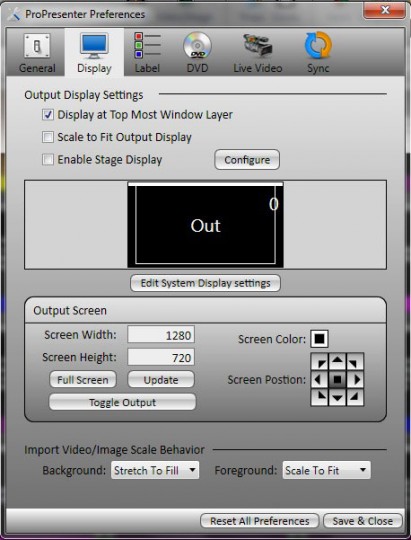 One of Pro4’s best features, the stage display is fully supported.If you have wanted to make the move to ProPresenter but haven’t because you can’t afford or justify the cost of a Mac to run it on, I see no reason not to switch. In my opinion, ProPresenter is so much better than the rest of the field, even if you have to run it in Windows, it’s worth the switch. Just make sure you check the tech specs for the minimum system requirements and to be sure the machine is up to snuff. It’s also worth noting that if you currently own a Mac version, your license extends to the Windows version. The reverse is also true. This is good news if you’d like to move to a Mac one day, but don’t want to re-buy your software. A site license also includes both platforms. Bravo Renewed Vision for being fair on this point. UPDATE: I was incorrect; a single-user license is only good for a single platform. A site licence includes both. End Update.

As always, you can download a trial version and play with it for as long as you like; there will be a watermark on the output, but otherwise the trial is fully functional. Overall, I’d say we have a winner here.