Last week Renewed Vision released a new version of ProPresenter 4, that addressed a number of bugs and added some great new features. The first new option is the ability to use Quartz Composer files directly within Pro4 Quartz Composer is Apple’s node-based dynamic graphics engine that can do all kinds of interesting stuff. Last year at WFX, Nicholas Rivero was showing me a demo of what he was doing with a portable MIDI keyboard and a bunch of code he wrote in Quartz to generate some crazy-cool backgrounds. I’m no expert in Quartz, but there are some interesting possibilities that can be done with it. Check out this blog for some tutorial examples and get your creative juices flowing…

Also new in 4.2 is the Mask Layer. You may already be aware that prior to v. 4.2 Pro4 had 5 layers to work with; (from the bottom up) Background Color, Live Video, Video Playback, Slides and Props. The new version adds a new layer, Masks. Masks are similar to props in that both can be used to either mask out part of your image (creating an edge-blend or creating a shape, for example) or keying a graphic log “bug” as often seen on TV shows in the lower right corner. Props are very cool and highly useful for both applications. The big problem with the props (and it’s not really a problem, it’s the way they were designed) is that it’s easy to accidentally clear a prop. Say you’re using a prop to mask out a section of your image (because you’re projecting on an irregular screen shape, for example). If you were to insert a “Clear All” cue into a slide after a video (which we do all the time), it would clear the prop and you’d have video blowing all over your custom screen shape. 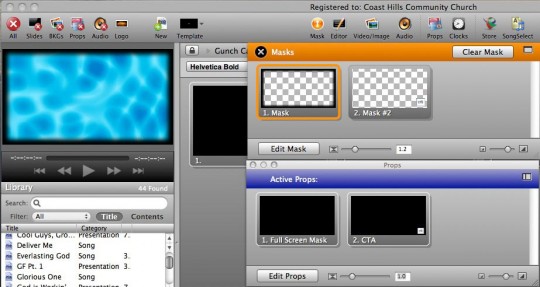 Similar to Props, the Mask is completely persistent.The mask was designed to solve that problem. The only way to clear a mask is to go into the mask layer window and hit “Clear Mask.” A Clear All won’t clear it. In fact, shutting Pro down and re-starting won’t even clear it. I saw a demo of this feature at LDI a few weeks ago and was immediately excited because this Christmas, we will be projecting on a very irregular surface. I’ll be able to pop on a mask and there will be no possibility of it coming off accidentally. This is a huge win for anyone doing projection like this, or environmental projection.

Also released this week was a new version of the iPhone remote app. This version seems to have fixed some bugs and (more importantly) added universal iPhone/iPad app support. I love what they’ve been doing with the app; it now shows color coding of the slides, all the text is clearly readable, and you can even access all the clear commands (including bail to Logo). You navigate primarily through playlists, though your entire library is instantly accessible as well. There is no ability to create anything in the remote app, and in my tests, I noticed that if you start running the show from the Mac, the app doesn’t stay in sync. However, if you want to fire off the slides from your iPhone or iPad, it works great. 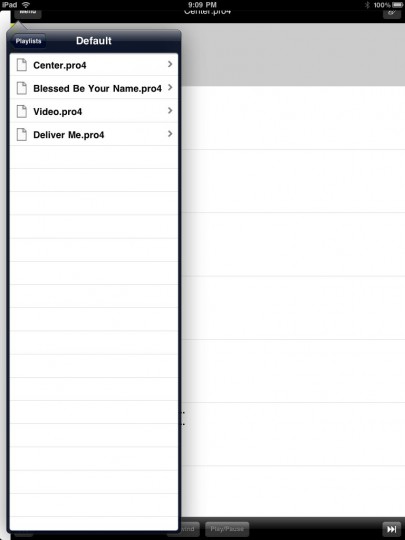 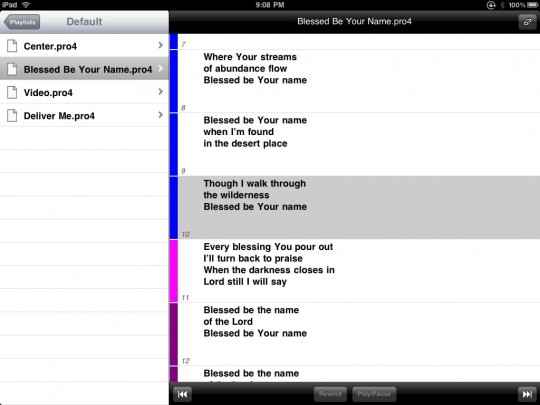 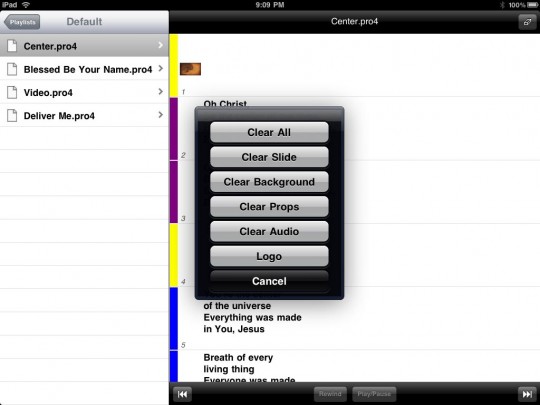 It’s nice to be able to clear from the remote.In my testing, I found the app to be generally reliable. I had a few times when it would connect then not respond, and there seems to be a slight delay from the time you hit the slide on the iPad/iPhone and when the change happens on the screen. If you try to fire through a presentation super-fast it will sometimes hang on a slide, but at a more normal pace it seems to work fine. It’s a good tool, but I’m not 100% confident I’d run a service from it yet. I think I would want to run a service from the remote, but be sitting at the Mac just in case as a test to make sure it’s solid. It does look promising, however and I’m excited that resources are being put into the app.