It’s no secret I’m a huge fan of the DIGiCo SD8. Even if you don’t have an SD8 I hope you’ll read on as the process of solving this problem may be helpful to you.

The SD8 is by far my favorite console to mix on. And it has a really cool feature that lets you tie the effects parameter edit window to the return channel so you can quickly access the FX right in the main interface so you don’t have to change screens. At least, it did have that feature. See, before v.300 of the software, you could select, “Solo Displays Insert” and whenever you hit solo on the FX return, the FX window would pop up. That was if you patched the output of the FX unit into the return of the insert on that channel (and left it off, we don’t really want the signal, just the association of the FX unit and the channel). In the old days, before v.300, it worked great. 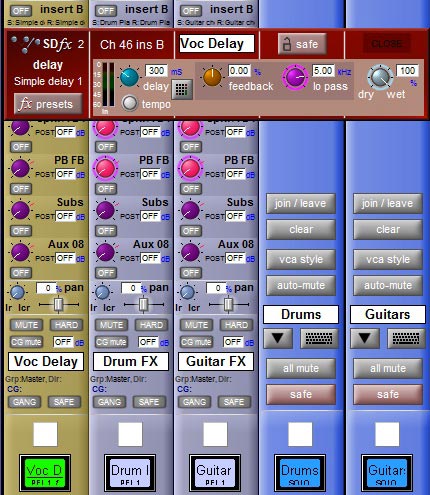 The green button is the solo button.However, with the release of the latest version of the software, they inexplicably changed the “Solo Displays Insert” logic. Rather than displaying the return route, it now displays the send route. I’m not sure what the supposed advantage of that might be, but it does make it impossible to accomplish the trick I got really used to, since you can’t have two sources feeding into the FX unit, even if one is a “dummy” input.

This morning I work up to an epiphany. I was thinking of ways to make the shortcut happen, within the confines of the new software. It occurred to me that I could simply change my audio path. What I did was reroute my aux sends to feed the return channel instead of the FX unit. I then patched the FX unit into Insert B on the return channel and whammo, I get my shortcut back. 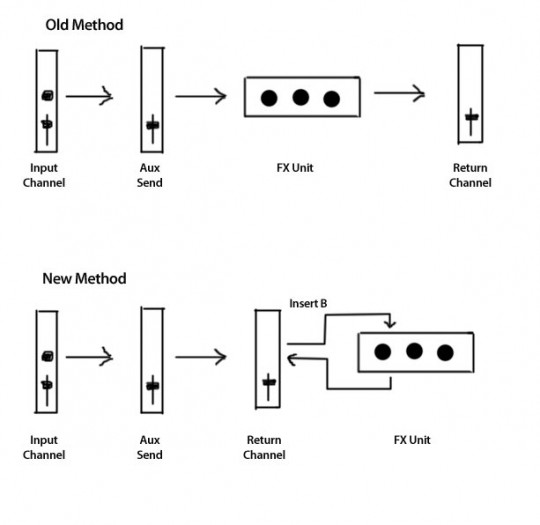 The old and new fx routing.The takeaway, even if you don’t get to mix on an SD8, is that there is almost always more than one way to accomplish your goal. You’ve probably heard the old story of the mother who while teaching her daughter to cook cut off the ends of the roast before putting it in pan. The daughter asked her mother why, and mom said her mother had taught her that. The daughter asked grandma about it and grandma said, “Oh honey, I only did that because I had a small roasting pan and that’s how I got it to fit.”

We often take things for granted because it’s the way we’ve always done it. It may even be a good way to do it. Sometimes though, there is another equally effective way to do it, you just need to change your thinking.