Since it’s a new year, I’m going to change things up on the blog. I’ve noticed that my posts have gotten increasingly esoteric, and possibly only relevant to a small set of readers. So I’m going to set aside Friday’s post as more educational that will hopefully be useful to a wider cross-section. Rather than get all geeky talking about snapshots and scope and automation, we’ll hit things like using groups, gain structure, basic lighting techniques, presentation tricks and probably even some video tips. With that brief introduction, let’s get started. Today’s topic: Using Groups.

A group, sometimes called a subgroup, is basically another mix bus that you can send the output of channel faders to. You could say that the Main Left and Right is a group—a stereo group typically. The signal comes into the input channels, the gain is set, it’s EQ’d and finally the output goes through the fader to a group; either the L&R main output— sometimes there’s a Mono option also—or you may have anywhere between 4-12 groups.

Most analog boards over 16 channels have at least 4 groups. Larger desks often have 8, the biggest may have 12. Typically, these are mono groups, though most of the time the output of the group can be panned left or right so if you use two of them you can build a stereo group. Usually, the output of the group is fed to the L&R mix, though some boards offer group outputs as well. If there is a matrix mix on board, the inputs of the matrix are usually the groups (including L&R).

Often, the groups automatically are assigned to the L&R mix. Sometimes you have to engage a switch to send it there. If you’re unsure, break out the manual (blow the dust off it first…). Normally you can pan the group if you want.

It’s important that you un-assign the channel from the L&R mix if you’re going to be using groups. Otherwise, you double the channel’s level at the L&R mix, risking overload, and negate the purpose of using groups. If you’ve been playing with groups and come in one day to find no signal coming out of a particular channel, check the group assign switches.

If you’re mixing to a mono or stereo system, it might seem like more work to use the groups; why not just send everything straight to the L&R mix? Well, you certainly can. However, if you have more than a few instruments on stage, or if you have a band plus a choir plus a number of people speaking each weekend, the use of groups can really make your life easier.

There are dozens of ways you can use groups and I won’t even begin to try to list them all in one post. I will present you a few examples of things I’ve tried which will hopefully give you some ideas. First up, consider a basic 4-group board such as a Mackie 1604VLZ (or the current 1642 VLZ3), a Yamaha MG32FX, or an A&H 2400 series. 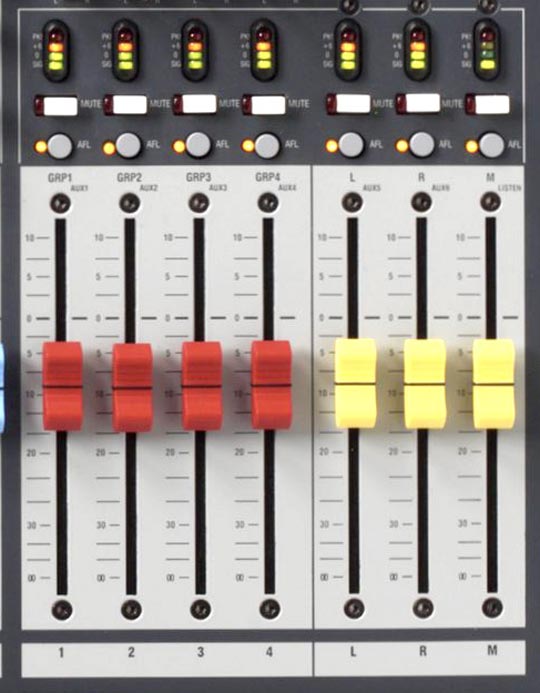 With four groups, you can’t break things up too much. But you can make them useful. Consider this layout:

In this situation, you would assign all your drum mics to group 1, all your guitars to group 2, and so on. Anything that doesn’t fall into those categories gets sent straight to the L&R mix. The advantage of doing this is that you can now move entire sections of your mix around at once. If the drums are feeling too loud in the mix, you can pull them all back, while retaining the balance you’ve set up between the mics. Need some more keys? Push the group up and you’ll get both piano and synth, again, maintaing the relationship between them you set on the faders.

One other thing you can do is group compression. If you don’t have 32 channels of compression for every input channel (and with an analog board, you probably don’t), you can insert a comp on the group. When I was mixing on a Soundcraft Series Two 32-channel desk with 6 channels of outboard comp, I typically had one patched in on my Vocals group. It’s not as ideal as compressing each singer individually, and you do need to be careful how much you compress (that’s another post), but a few dB of gain reduction on the vocal group can keep untrained singers from getting out of place in the mix. Remember, less is more here, and the upside of compressing everything as a group is also the downside; everything gets compressed. A few dB of group comp on the drums can really help glue that together in the mix as well.

An added benefit is that you can now shut the entire band off in the house by pulling down four faders. Note that the group faders will not affect aux sends, so if the channels faders are still up and the channels un-muted, sound will still come out of the monitors. That may or may not be what you want depending on your situation. 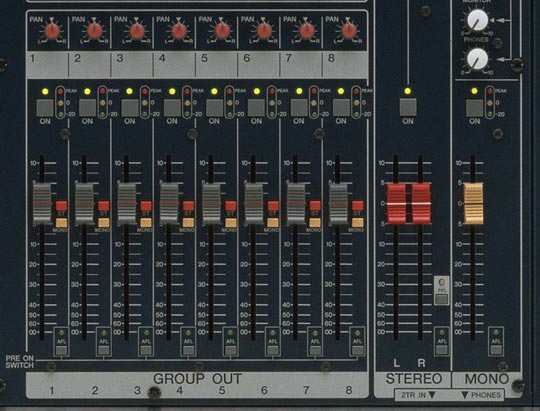 If your board offers eight groups, you have some more flexibility. Here’s how we had our Series Two laid out:

With this type of set up, you can easily tweak the mix using just the groups. Once the overall mix balance is set up, adjustments can be made on the groups to highlight different sections of the band for different songs. Having mixed for a few more years since then, here’s how I may lay it out today:

I would sent speaking mics to the main L&R mix, along with all playback. The reason for putting the kick and bass together is that those two form the foundation of the mix. Since they’re tied together musically, it makes sense to control them together. I wouldn’t try to group compress them, however. If you did, every time the kick would hit, the bass would drop down. Better to use individual comps or none at all.

If you have a matrix, breaking your band up to feed the matrix can be very useful. For example, let’s say you have some ceiling speakers in the lobby or a cry room. Sending the entire house mix to those speakers may cause distortion from all the low end, or the vocals may not be clear. But let’s feed it from a matrix that’s fed from the groups. In this case, you could lower the level of Group 1 and perhaps slightly bump the level of the vocals. If all your channels don’t end up in groups, you can start by sending the main L&R mix to the matrix, then supplement with additional groups to get the mix you need—“subtraction” happens by not adding a particular group to the matrix. Groups give you a lot of flexibility.

I could go on for another thousand words, but I’ll call it quits for now. Obviously, I’ve only scratched the surface of the use of groups, but as I said at the beginning, my intention was not to be exhaustive, but suggest some ideas that will get you thinking.

How do you use groups? Please feel free to share!