We saw a lot of iPads at NAMM this year. It’s no surprise really, the iPad is a perfect remote control device. The surface is large enough to design a good interface, there’s plenty of room for clicking and dragging and the touch screen is of high enough resolution that you can actually make fine adjustments. I don’t think we caught all the all the apps, but here are a couple that are interesting. 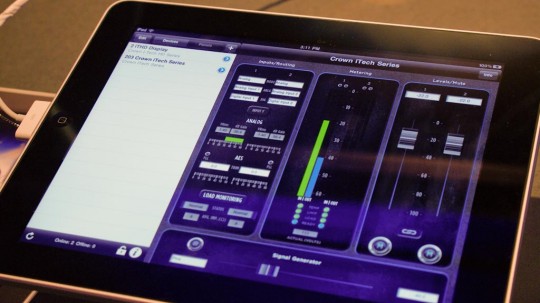 Crown System Control AppIn the Harmon room we saw the new Crown System Control App. Running on HiQnet, the app allows you to completely control your entire Crown amp rig right from the app. Because it integrates with System Designer, you can develop all sorts of custom control panels and load them into the app. You could even create a custom control panel and use something like an iPod Touch as a custom wall control. Now that’s kinda cool. It’s also possible to connect to the system and directly monitor and control every single amp (included HiQnet connected powered speakers) right in the app.

The app is $3.99 and available for both the iPhone/iPod Touch and iPad in the iTunes store. 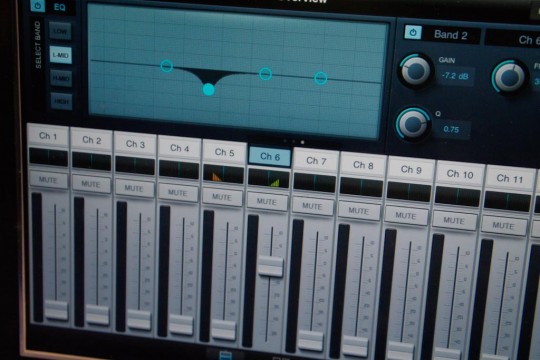 Presonus StudioLive Remote iPad AppOne of the nicest looking iPad apps, is from Presonus and it’s designed to control the StudioLive consoles. As I understand it, the app controls the computer that is running Virtual StudioLive. It’s a true iPad app, not a port and it is extremely fast and easy to use. It’s very easy to switch between the gate, comp and EQ on a channel by flicking left or right. EQs can be adjusted right on the curve display, or using the large virtual knobs. To pan a channel, you just drag in the pan window (above the fader, note the orange and green stair steps in ch. 5 & 6).

Interestingly, multiple iPads can connect to and control the software at once; and you can set each iPad up to control a particular aux mix. So in that sense, you could almost have a personal mixing system with your StudioLive with the addition of just a few iPads. And since the StudioLive 24.4.2 has 10 aux mixes, well, you do the math. It’s certainly an interesting concept.

The biggest downside to the app however is not with the app itself, but with the board. Since the StudioLive lacks moving faders, any changes made in the app are not reflected on the surface. Which means you really can’t set up a mix on the desk, grab the iPad, walk the venue and tweak the mix then return to the board. That’s a huge limitation to what would otherwise be a great combination.

Honestly, it’s too bad because Presonus has come up with the best looking and potentially most functional iPad remote mixing app to date. Presonus! Are you paying attention Avid? DIGiCo? Soundcraft? Midas?

Not really new, but worth mentioning are the Yamaha StageMix iPad app for controlling the M7, and Tweak from Allen & Heath. Tweak is really limited and only really good for just what it’s name implies, tweaking. I would not even attempt remote mixing on it. StageMix is much better, and with the ability to sends on faders, would be a boon to both monitor engineers and FOH guys.

We also saw an iPad controlling the Meyer Constellation system in their demo room, and at quite a few other booths. Clearly progressive audio companies are getting the clue that networking and remote control are the future. Now what are the rest of you waiting for?

UPDATE 1-20-11: Allen & Heath apparently announced an actual iPad app at NAMM. I missed this, but ProSound Web has the story. Based on the screen shots, it looks pretty nice…