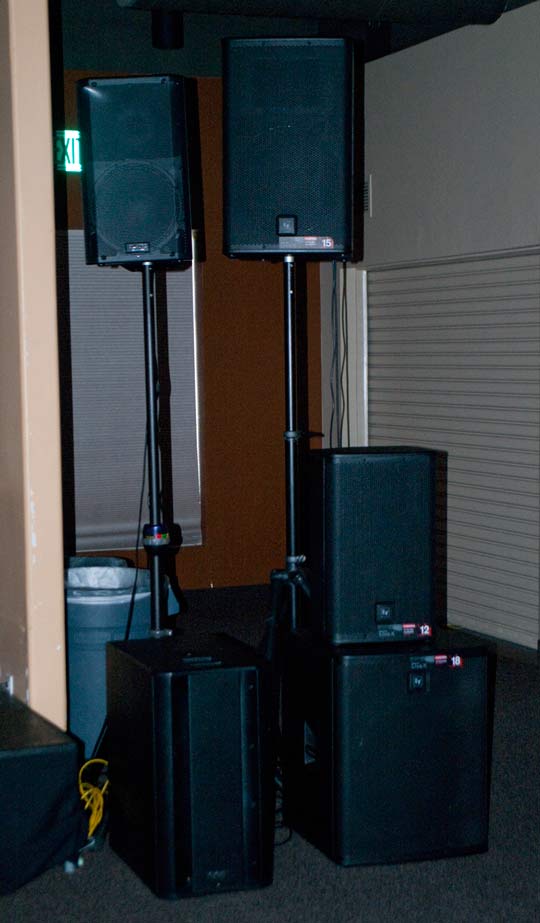 Our setup for speaker testingOne of the most interesting (at least to me) announcements at NAMM was EV’s new line of self- and un-powered speakers, the LiveX. They were a direct shot at QSC’s K-Series, and come in at a compelling price point; roughly $200 a box less than a comparable K-speaker. Based on the demo we heard in their small demo room, I was very interested. This was a timely announcement as we are in the process of upgrading our PA in our student room. The existing JBL Eons are just not doing it, and it’s time to make a change. Though we were told the speakers were in stock and ready to ship, that turned out to be marketing-speak. It took a few months of wrangling, but the truck finally delivered two palates of speakers to my dock. It was an exciting day.

Since the K-series is sort of the new standard in this category, it seemed fitting to compare the LiveX to those. I called up Criss from AudioGeer, our local QSC rep and asked if he could bring some speakers down. He brought me two K12s, two KW121s a KSub and a KW181 sub. Now, I had heard the both speakers before, but it was in another room. I didn’t really like the KWs then, but I’ve heard they have improved the DSP settings so I thought we’d give them another shot. 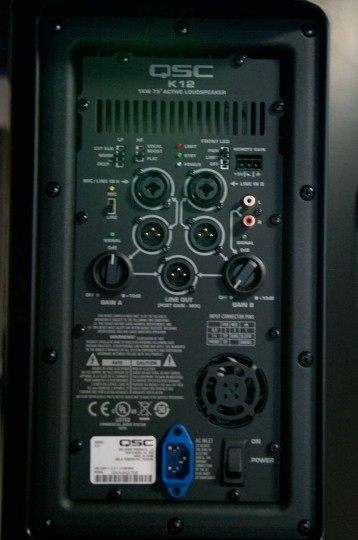 The K12s offer a variety of input and mixing options.
We set up the LiveX 12s and the KW121s first, along with the subs. Since I’m also testing a Symetrix Jupiter 8, we ran everything through the Jupiter. The crossovers were set so that the speakers themselves were doing the crossing over (as recommend by Criss), and the EQ was flat. We really wanted to hear the speakers.

Right off the bat, there was a very noticeable difference between the two. Neither was necessarily bad, but the EV had quite a bit more upper midrange to high end detail. The K’s tend to be a bit darker overall, and the 121 was no exception. Pattern control is really tight on the 121 (it’s 75 degrees, conical), with a very noticeable falloff as soon as you get to the edge. In our room, that did not work to our advantage. 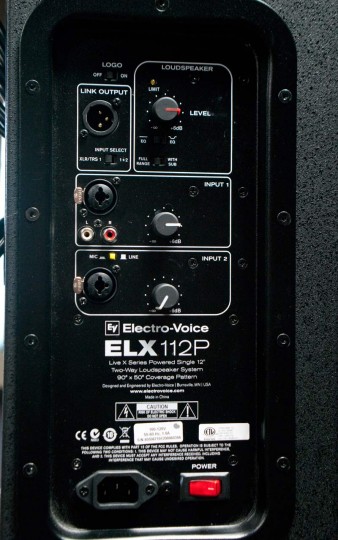 The LiveX, on the other hand, are a bit simpler.The LiveX 12s, being a 90×50 box, actually fit perfectly. We could aim them to get very even coverage right down the sides of the seating area, with a pattern that was just off axis on the front of the stage. As I said, there was a lot more detail in the high end, but it was accompanied by some unwanted artifacts in the 3-4K range. They actually bordered on harsh at times. Once we drove them up to around 96-98 dB SPL C, we really didn’t want to go farther. Which is too bad, as I really need to get 104 or so out of that system.

We played around with them for a few hours and finally decided the LiveX 12s were the best choice for the room. Criss and Jim left and Van and I started cleaning up. On a lark, we decided to throw the LiveX 15s up just because they were there. I should clarify that I wasn’t super-impressed with the 15s at NAMM. I really did like the 12s, but the 15s were just OK. I didn’t expect to go with the 15s, but Kevin had them sent down anyway. I’m glad he did. We threw them up on the poles, popped in a little Zac Brown and after about 2 measures, Van and looked at each other with our mouths hanging open.

Suddenly, all the harshness that the 12s had disappeared; they were smooth as butter all the way to the top. They still had more high-end detail, a wider sound field and more even coverage than the K12s, but they just sounded so musical and listenable. With the 12s from both companies, once we hit around 96 dB, we really wanted to stop. With the 15s, we just wanted to keep going. It was quite surprising. We knew within a few minutes the LiveX 15s were the winners, but we kept throwing different musical styles at them. After an hour, we called it quits.

That Sunday, with the student band on stage, I again switched back and forth between the LiveX 15s and the K12s. It was pretty clear what the best choice was.

I’ve not mentioned the subs much at all; and I’ll just say this. The KSub doesn’t do it for me. It’s a dual 12, and just doesn’t have the punch we need. The KW181 was pretty nice, and if we had gone with the K12s for tops, I would have gone with two KW181s. However, the LiveX EXL118P really sounded good for what it is (a $700 powered sub). We had some interesting coupling effects in the middle of the room at first with the 15s and the subs, but once we switched the 15s to “With Sub” mode, it all cleared up. This switch inserts a high pass filter at 100 Hz. With the band on the stage, we decided we needed a little more low end oomph, so I boozed the subs about 8 dB relative to the top boxes. This gave us the low end we were looking for.

So the winner, at least in this room, is the LiveX 15 and sub. It beat out the QSC speakers mainly on coverage pattern and price. Though the 15s really did sound significantly better, at least in our space. Now, you do give up a few things with the LiveX. They don’t come with the nice bags that QSC provides (however, I have a room full of EON bags that we never use). You also don’t have any integrated fly points with the LiveX, so we’re looking at ATM’s wall mounted pole arms. I’ll say that QSC makes a nice speaker, and I can see it being a perfect choice for a lot of applications. However, for us, the LiveX wins this one. Now, these are not Meyer or D&B boxes. I’m not going to say that they can compete with that level of cabinet. However, the entire system will cost less than a single M’elodie, so see them for what they are. If you’re looking for a affordable, portable system, give the LiveXs a listen. Compare them to the K-Series and see what you think. And remember, the right speaker for our room might not be the right speaker for your room.