Today I’m excited as we have a guest post on CTA! Rob Sayer is a lighting designer and the editor of On Stage Lighting, which just happens to be the world’s largest blog on production lighting techniques. For this post and next, Rob is going to share some basic concepts on stage light. Be sure to check out his site, as there is a wealth of information there. Without further adieu…

If you are responsible for the stage lighting in your church, you’ll know how important it is for many reasons.  Light can set mood or atmosphere for worship, uplift and inspire.  It also provides that all important visibility – your congregation being able to see those on stage and connect with them.

In stage lighting, we have a number of controls at our disposal, tools in the box if you will.  As well as intensity, we have beam size and quality, colour and even the dynamics of lighting changes over time.  One lighting control that is often overlooked or misunderstood, particularly outside of theatres and music concerts is the angle that light arrives at our lit subject, be it a pastor, a choir, band or even a scenic piece.

The angle of incidence, to give it it’s proper title, is a function of where a light source placed in relation to it’s intended target.  Light might come from in front of the subject, behind or even from the side and the use of these different angles can be as dramatic as any other tool we have.

The angle of incidence is always described relative to audience point of view.  Front light arrives at the stage in the same direction as the audience is looking.  In recorded media, the camera is deemed to be the audience and the angle is referred to in terms of that Point Of View (POV). As well as this angle being described in a 360 degree rotation around the target in plan view, it can be noted in terms of height of origin – a high front light up in the roof, a low front light from in front of stage on the deck.

Let’s look at the different angles of incidence in broad terms and what they mean to you and your show.

Front Light
Light arriving from in front of the subject, usually either over the audience on pipes or trusses or stands at either side of the seating.  Front light provides the all important visibility for both audience and face-on cameras and allows the congregation to connect with the Pastor and their message by being able to clearly see their eyes and facial expressions. More on Front Lighting. 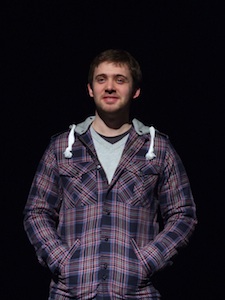 An example of front light.Good frontlight opens up the face to the viewer without making the subject squint or too uncomfortable although there is no avoiding that when you are on stage, lights hit you in the eyes.  Being able to clearly see someone speaking also assists intelligibility, something that I’m sure Mike would approve off – front light does this for us.

Front light is pretty much the first consideration for most churches with few lighting resources.

Top Light
Light coming from directly overhead, top light (or down light) provides a dramatic look for a person on stage.  With extreme contrast between features, the eyes and other areas of the face are hidden in shadow when top light is used on it’s own, making the subject appear almost ghostly with a strong halo effect on the top of the head and shoulders. 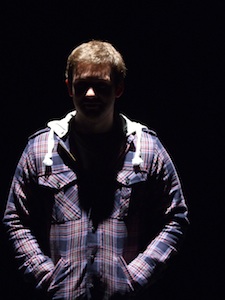 Top Light.Used along with lighting from the front, top light provides us with some more depth to a three dimensional picture while keeping that high contrast effect.

Top light is also used extensively for lighting orchestras and choirs so that they can read their scores clearly.  There is an article over at On Stage Lighting specifically on lighting a choir or ensemble successfully, not always an easy thing to do depending on your rigging situation.

Back Light
Arriving from upstage, above and behind the target, back light provides the some real depth to a stage picture that could be rather flat when viewed straight on, making the subjects stand out from the background.  This is particularly important to cameras, which shoot a 2D image and helps the viewer perceive some Z depth between things on screen. 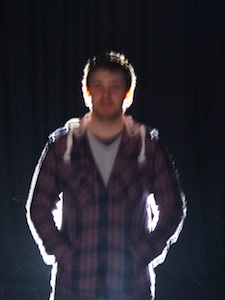 Back Light.Back light is easy to spot because it produces a fine halo (or rim) of light around a form, sometimes referred to as rim lighting. It is also very useful for washing a stage floor with a strong colour, without transforming anyone on stage into that same colour, instead leaving a pleasing rim around their form while light from forward angles fills in their features.  Stage floor colouring is only useful if your audience are seating above deck level, of course, with raised seating can provide an excellent canvas. More on Back Light.

The concert industry lighting designers love to fill their stages with angles from behind the performers as they can create an exciting stage picture with plenty of colour and depth.  Plus, light beams that shine forward through a haze atmosphere refract better that ones travelling away from the audience.

Next time, Rob will be back with more angles and some great thoughts on putting it all together.

Rob Sayer is a professional educator, Lighting Designer and programmer who is currently lecturing in Theatre Production at Bath Spa University in the UK.  With 20 years professional experience in show business Rob is also the Editor of On Stage Lighting, the world’s most popular blog on learning production lighting techniques.

With thanks to Alex Musgrave, lighting designer and student at BSU who appears in the examples.