Let me start with a brief history of the naming conventions of Digico consoles. The original consoles were the D-series. Only the D5 survives today, so we’ll skip that. The SD7 was introduced in 2007, and was built on a brand-new FPGA architecture called Stealth Digital Processing. Unlike than DSP, which is fixed, FPGA’s can be reprogrammed in the field (hence the Field Programmable Gate Array name), which means new features can be added via a simple firmware update. In 2008, the SD8 was introduced. 2009 brought us the SD9 (see the concept now?). In 2011, we go the SD10 and SD11 (the 10 was a little late…).

The SD5 was introduced in 2012, and you might ask why it’s not called the SD12. That’s because the SD5 is the SD version of the D5. All the SD consoles share the same software and basic interface, and are built around the Stealth FPGA. The differences are in I/O count, mixing channel capability and the surfaces.

Today, we’ll focus on the larger consoles that would make great choices for FOH desks for mid- to large-sized churches, the SD8, SD10 and SD5. I’m skipping the SD7 because that’s a big, powerful desk with an equally large price tag. I’m not going to get into the nitty gritty details of all the features; you can find that at Digico’s website. I’ll try to focus on key differentiators that would help you decide which one to buy.

On the bus side, while any or all of the SD8s busses can be stereo without affecting count, a stereo bus counts as 2 on the SD10 and SD5. You can still mix and match mono and stereo groups and auxes, but the total number of will depend on the mix. To illustrate, let’s do an example.

On the SD8, you start with 24 mixes available. If you create a stereo LR mix, and 3 stereo auxes (that’s 4 total mixes), you now have 20 left. On an SD5, you start with 56. Creating our same stereo L&R mix plus 3 stereo auxes (that’s 8 “channels” of mixes) will leave you with 48 mixes left. Make sense? In practice, it’s not really complicated; simply enter the number of channels, groups and auxes you want to configure the session with and it will tell you if you have enough or not.

When trying to decide between consoles, the best thing to do is download the offline software and start doing session configurations. It will quickly become apparent which console you need based on how you want to configure it. If you do a lot of stereo mixes, they can handle about the same number; but if you need a large quantity of mono mixes, the SD10 or SD5 are better choices. 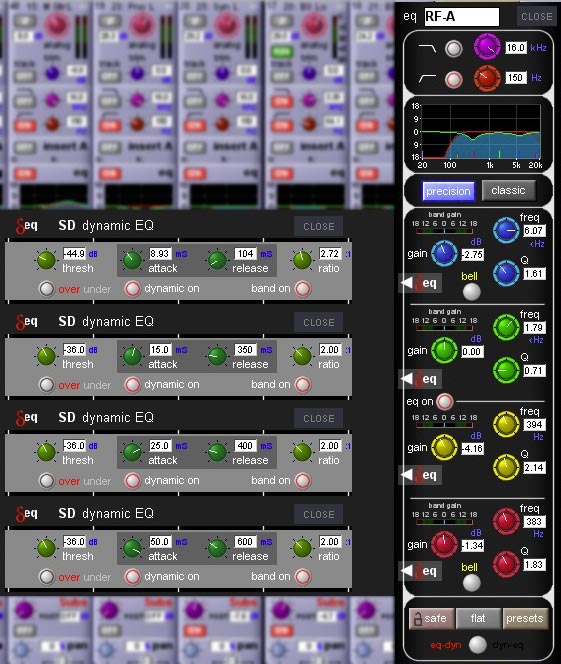 While all the processing is available on all channels, there is a limit to some of it. With the SD8, you can create up to 10 multi-band comps (up from 8 last year—yeah for FPGA!) and 10 dynamic EQs. The SD10 gives you up to 16 of each, while the SD5 gives you 24 multi-band comps and dynamic EQs. On each desk, you can assign any of those extras anywhere, and they don’t have to be on the same channel.

We’ll cut it short here as I’m realizing there is so much to talk about when it comes to these consoles. Next time, we’ll investigate the surface differences.