Last time, we looked at the basic components of the myMix system. Today, we’ll put the system together and see how it sounds.

Once I had the system wired together (which was very easy—no manual needed), I wirelessly connected to the myMix PLUG for configuration. The PLUG is a small computer and wireless access point that serves as the interface between the user’s browser and the myMix network. I did need the single page “manual” for this step, but only to get the IP address to hit with my browser, and to learn the username and password. Once connected, configuration was pretty easy. myMix uses a straight HTML interface for configuration, which is both good and bad. It’s good because no additional software is needed; you can hit it from any browser. 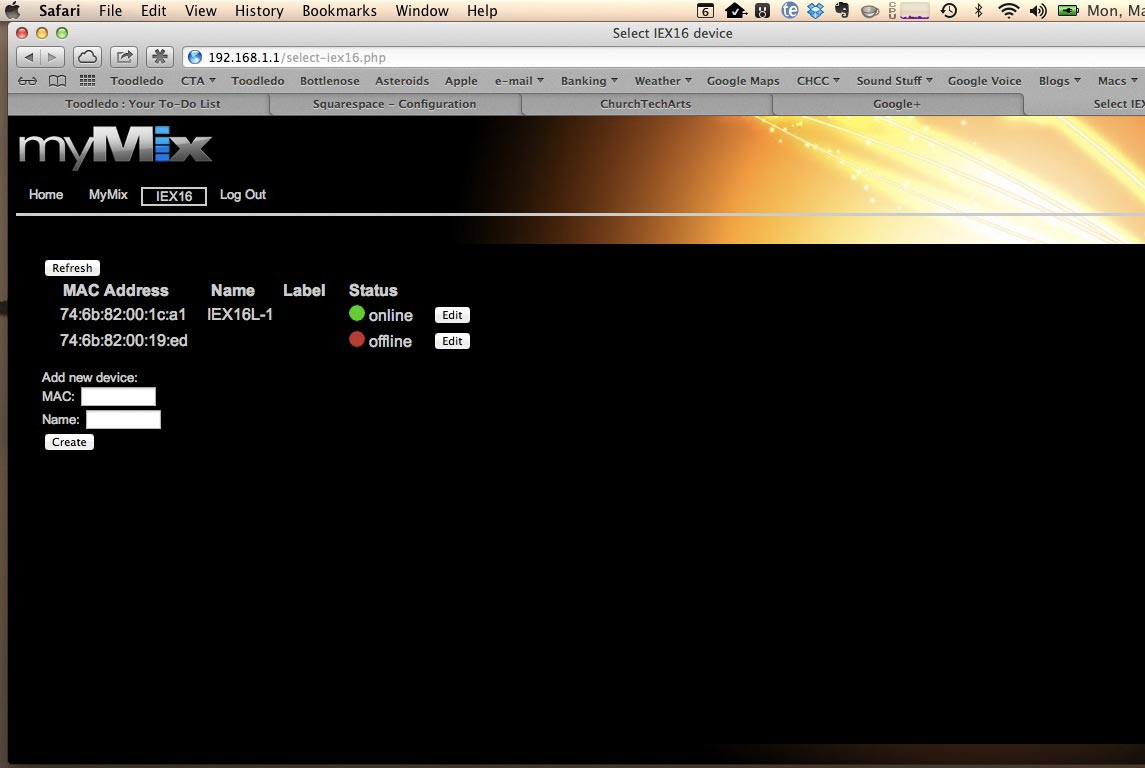 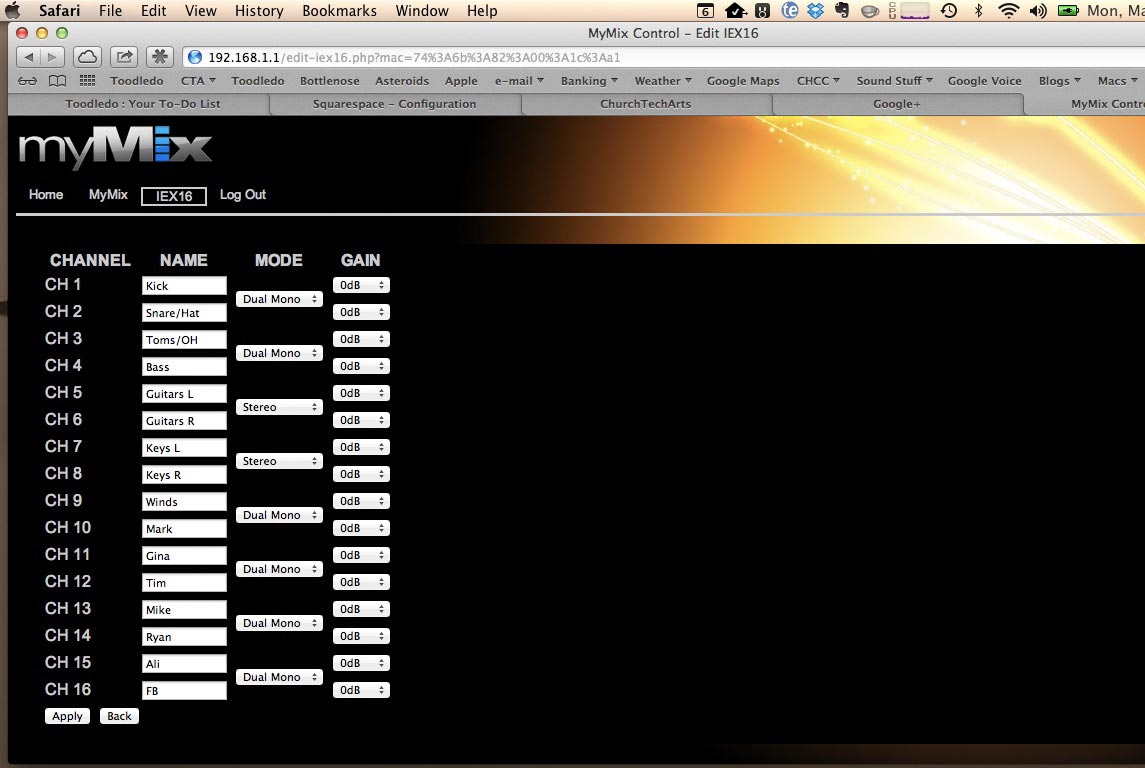 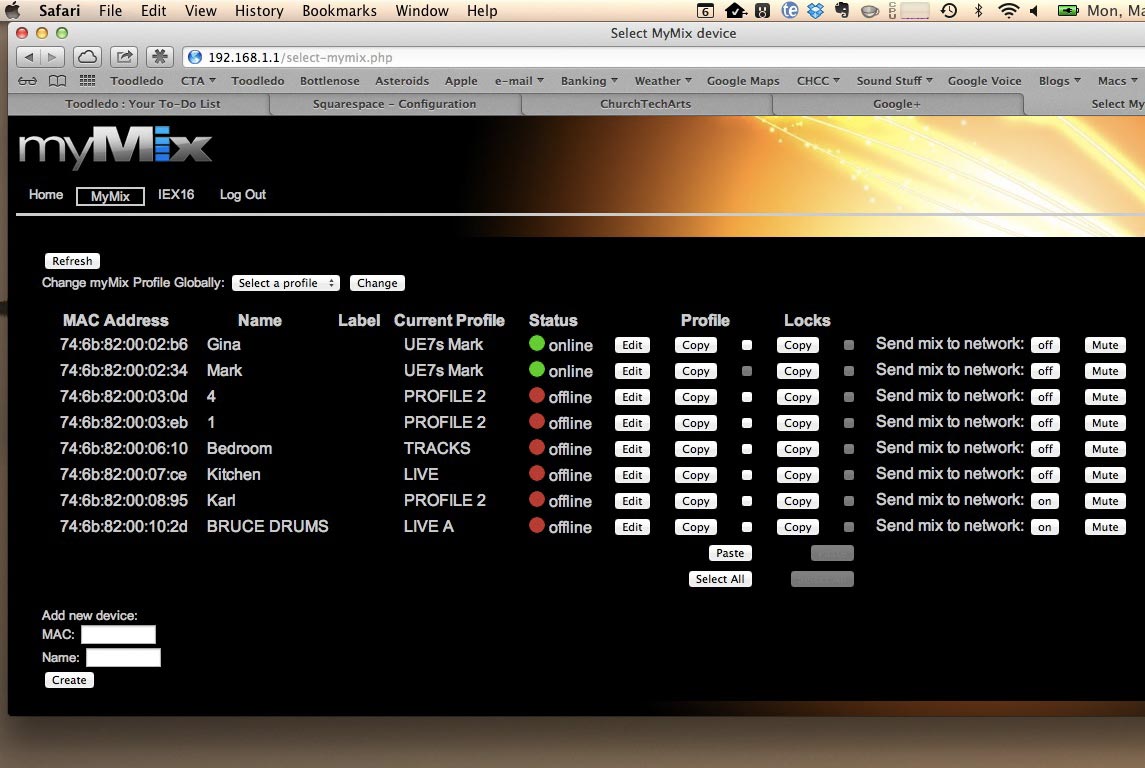 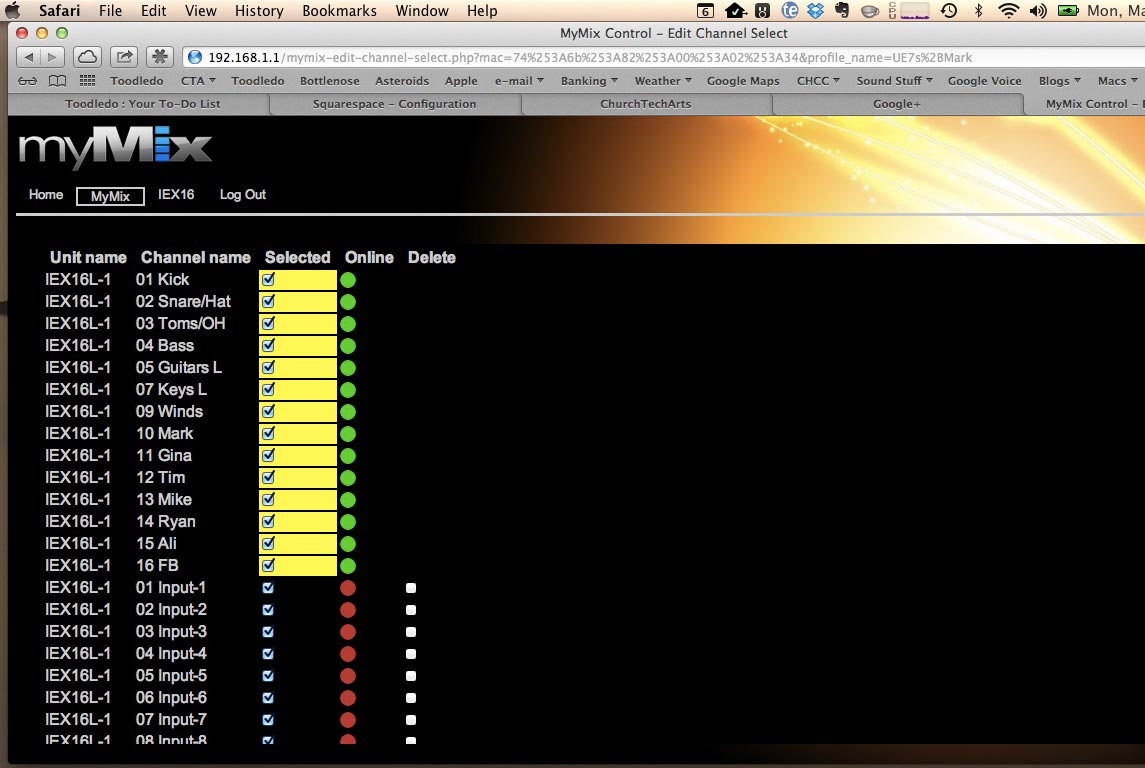 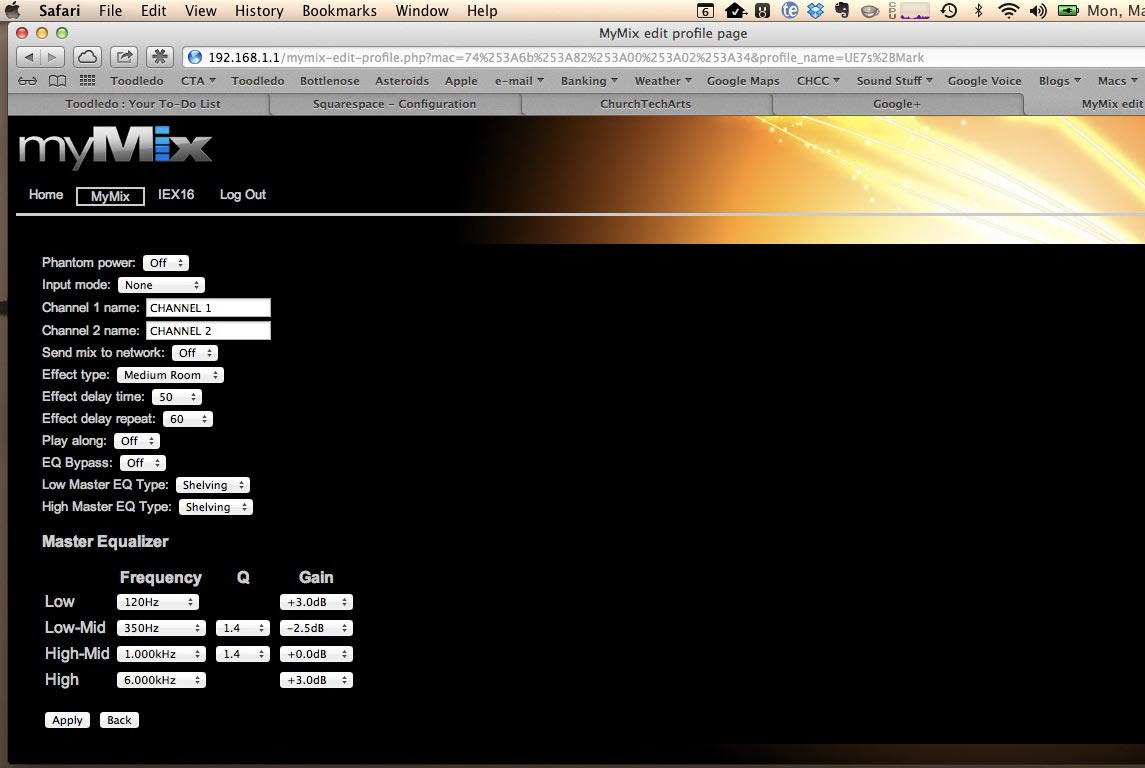 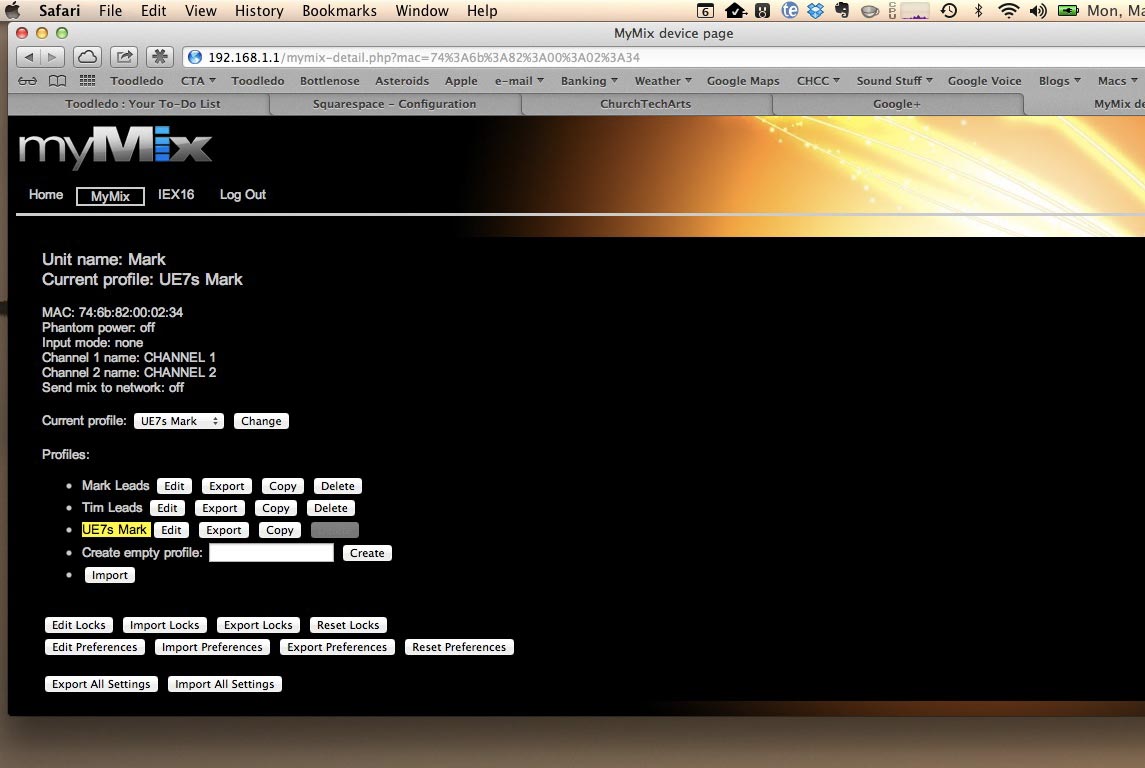 The downside is that you’re limited to HTML-accessible controls, which means buttons and drop downs. The layout is not the prettiest, and it takes a little bit to get the lay of the land amongst the rows of similarly sized buttons. Once you get it, it’s pretty easy to get around on.

I got into the input expander and quickly named the channels and set the stereo pairs up. That took about 3 minutes. I then started configuring the myMix mixers. It didn’t take long to get my inputs assigned; the biggest challenge (which wasn’t really that hard) was figuring out where to turn off the built-in inputs so I could access all 16 inputs from the input expander (hint: it’s in preferences; select “None” for the built-in inputs). With that done, I put on my headphones and built my mix.

I noticed this at NAMM, and it was confirmed again in the studio—these sound good. The headphone amps are very, very stout, and easily drove my Heil ProSet 3 headphones very loud. I tried my Ultimate Ears UE900s and UE7s, and had to turn the unit down. So volume will be no problem. The sound is also very clean. The audio is 48KHZ, 24-bit, and it sounds like it. Even when I clipped the inputs (you see clipping when the channel names turn red), I heard no distortion.

The sound quality gets a two thumbs up rating from me. It’s easy to set up different configurations on the unit, and save them as Profiles. This can be accomplished through the Control software interface, or on the units themselves. One feature that was very handy was being able to set up a profile on one unit, then quickly copy it via the web interface to another. You can also save profiles, and upload those to other units via the web interface. It would be very easy to build multiple starting configurations and upload them for each musician as needed.

You can also adjust the individual mixes on each unit using the web interface, but you probably won’t want to. This is one of the big limitation of the HTML interface. To set the volume of a mix channel, you select from a drop down menu that gives you volume values in .5 dB increments. Panning is the same way, only you select items like “72% L / 18% R.” And once you set all the levels, you hit apply to make the changes stick. Building mixes on the mixer is much, much faster.

On the other hand, the cool thing about Control is that you can put it on a network and access it literally from anywhere. In fact, if you visit mymixaudio.com, you can log into their myMix network and see that input expanders and myMixers they have plugged in. This could be useful for troubleshooting.

You can also select various parameters to lock the user out of. For example, if you don’t want the user changing channel selections, you can lock that feature out. The list of lockable parameters is quite extensive, so you have very granular control, which would be nice for keeping musicians out of the configuration pages.

As I said at the start of this review, I was initially not that impressed with the concept of myMix. But as it’s grown up and more features have been added, I think it’s a solid system. Price-wise, you’re looking at just under $700 each per mixer ($679 MSRP). The input expanders run about $1,000 (add $300 to include the ADAT ports). The POE switch will set you back $200-800 depending on model and number of ports (they recommend various models from D-Link, Cisco and Netgear). Finally, the myMix PLUG is just under $700.

So it’s not a low-budget option, but it’s a highly flexible one. Cost-wise, it’s on par with Aviom, but it’s far more capable and sounds a lot better. You can save and pre-build mixes like we do on the Roland M-48s, though it doesn’t have the channel count or mixing ability (the M-48s can mix 40 channels into 16 stereo groups).

And we didn’t even talk about the ability to record multi-track audio of all 16 channels on the system at any or all of the mixers on a simple SD card. What a great way for musicians to be able to listen to and critique their playing (and hopefully get better).

Today’s post is brought to you by CCI Solutions. With a reputation for excellence, technical expertise and competitive pricing, CCI Solutions has served churches across the US in their media, equipment, design and installation needs for over 35 years.