It’s been a long time coming, but we finally did it. For years I’ve wanted to update our stage lighting rig, but the funds have not been there. A few years ago, we managed to score some used High End Studio Color 575s which gave us some additional color backlight, but it wasn’t what we really wanted. But this year, our End Of Life savings plan starts paying off.

2013 is the year that our six Martin 518 Roboscan lights were due for replacement. I guestimated we’d need about $15,000 to bring them up to modern specs, based on the cost for an Elation Platinum Spot 5R. When we actually started shopping for fixtures however, we started thinking differently.

No Haze—Do We Need Beams?

We stopped using haze a few months ago (for a lot of reasons), so we started thinking, “Do we really need beam-type fixtures?” The answer kept coming back, “No.” What we really need is a ton of color back and side light. So that led us to start shopping for a moving head LED with plenty of punch.

We called about some Elation Impression 180s, but they were already sold. We looked at the Elation Design LED PAR Zoom MH, but it wasn’t bright enough for what we wanted. I even thought about just putting a ton of static LEDs in the truss, but we couldn’t make it work financially.

It Pays To Shop

Then one of the guys (either Thomas or Jon) found what we ended up buying; 13 Elation Impression 90s (discontinued). At just under $700 apiece, getting them shipped to us came in just under $10,000. That left us about $5,000 left in our budget. Thomas came up with the idea of putting 18 ADJ FlatPar Tri7x fixtures up as truss warmers, and 8 of the Tri18x’s as side light.

I had to pull from my main operating budget a little bit to make it all work, but we not only ended up with the 18 truss warmers, 8 side lights, 2 ground stacked up lights (plus the 6 side lights we already had), we also sneaked in a half-dozen Tri7x’s in for our community room. 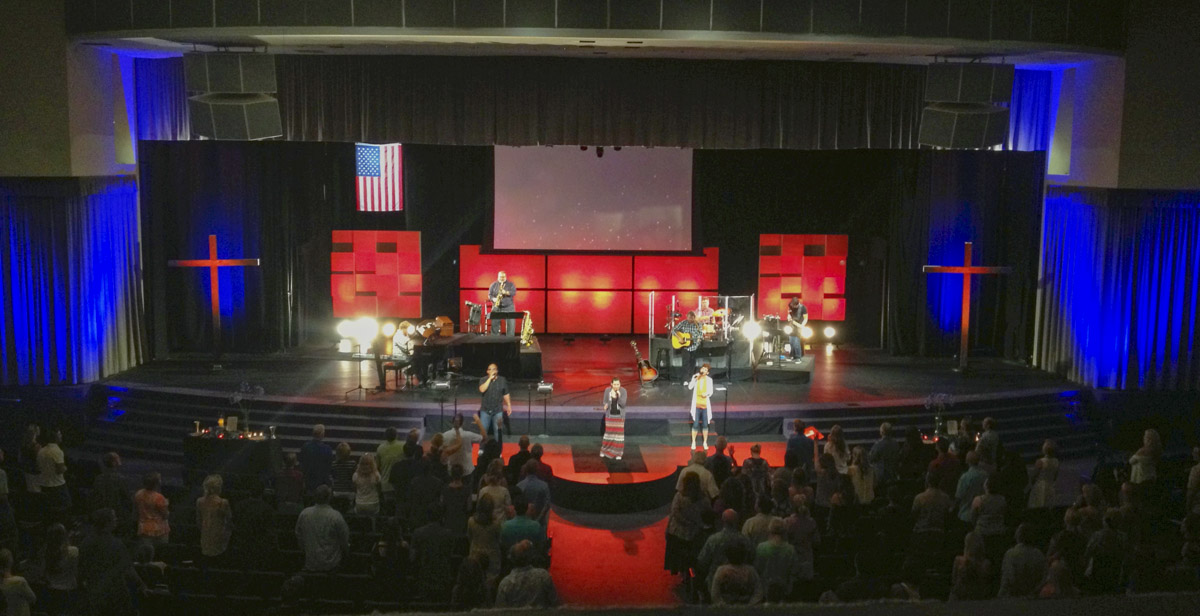 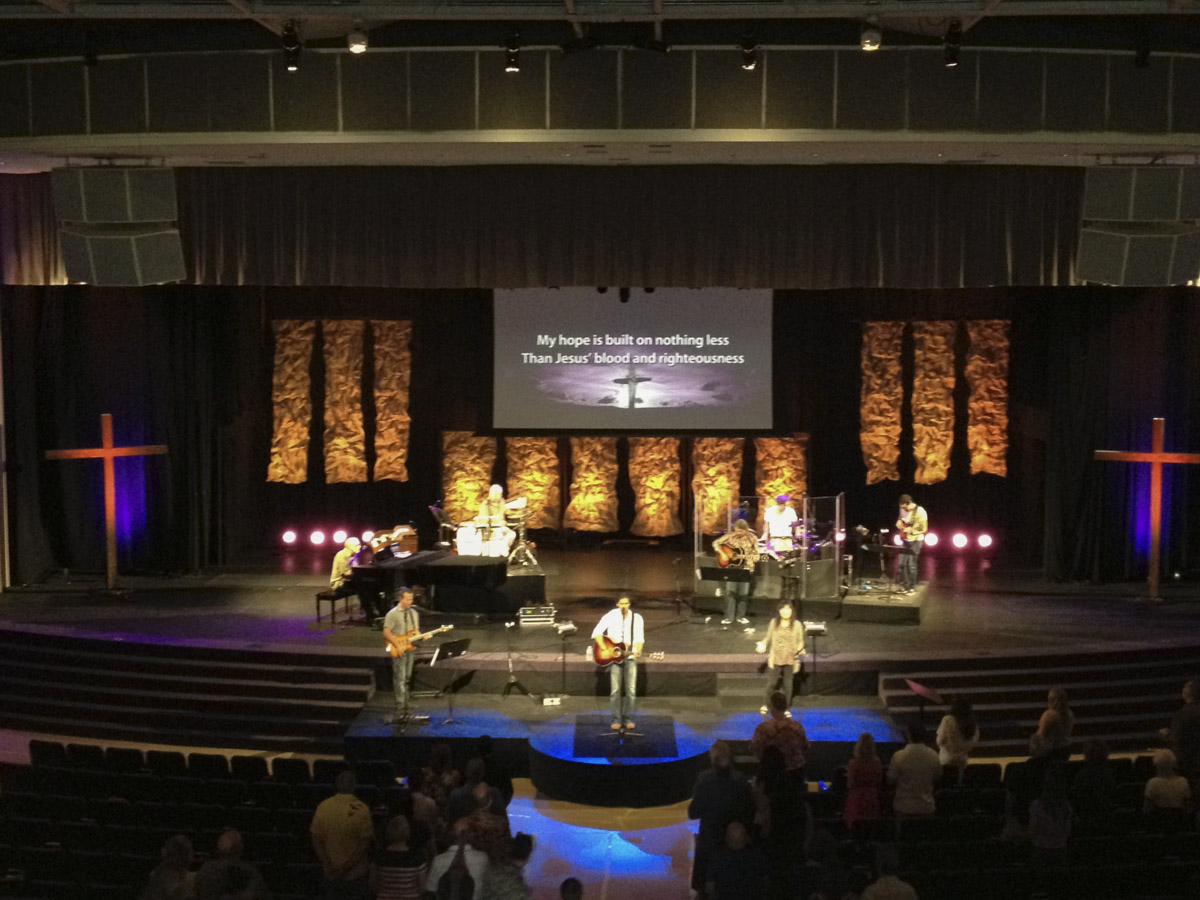 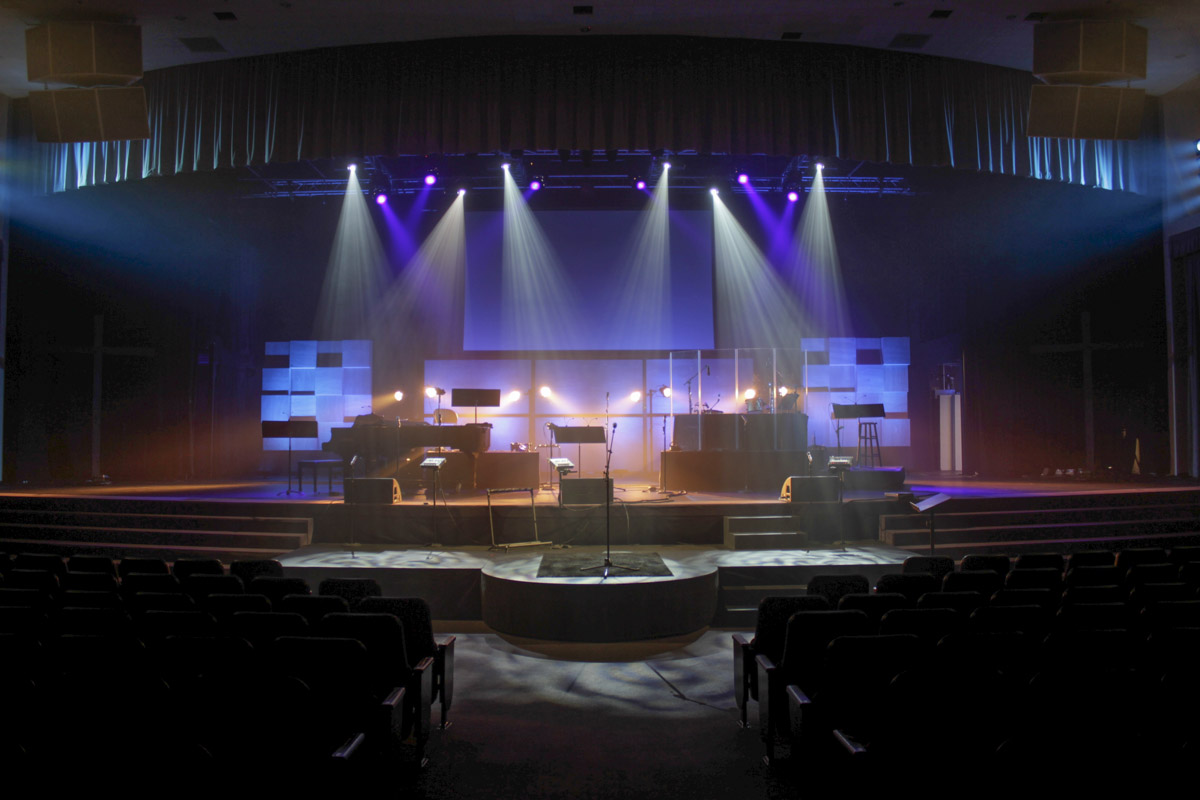 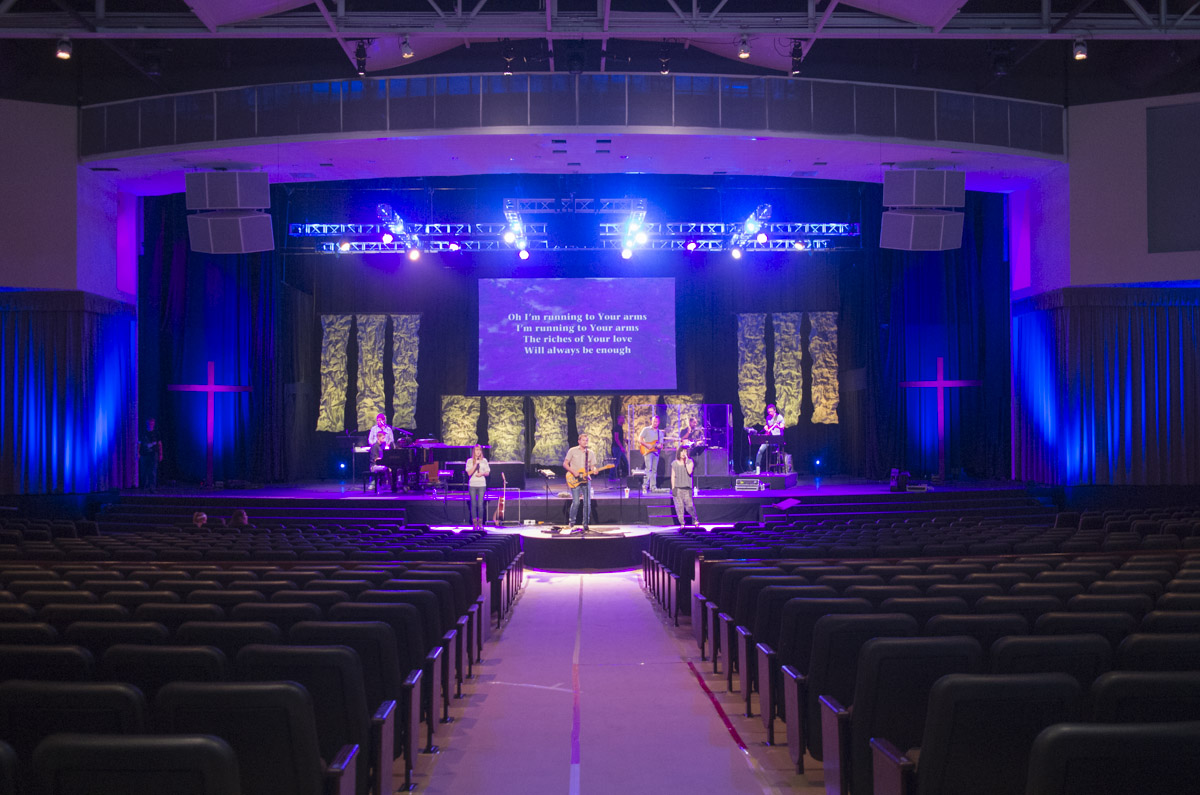 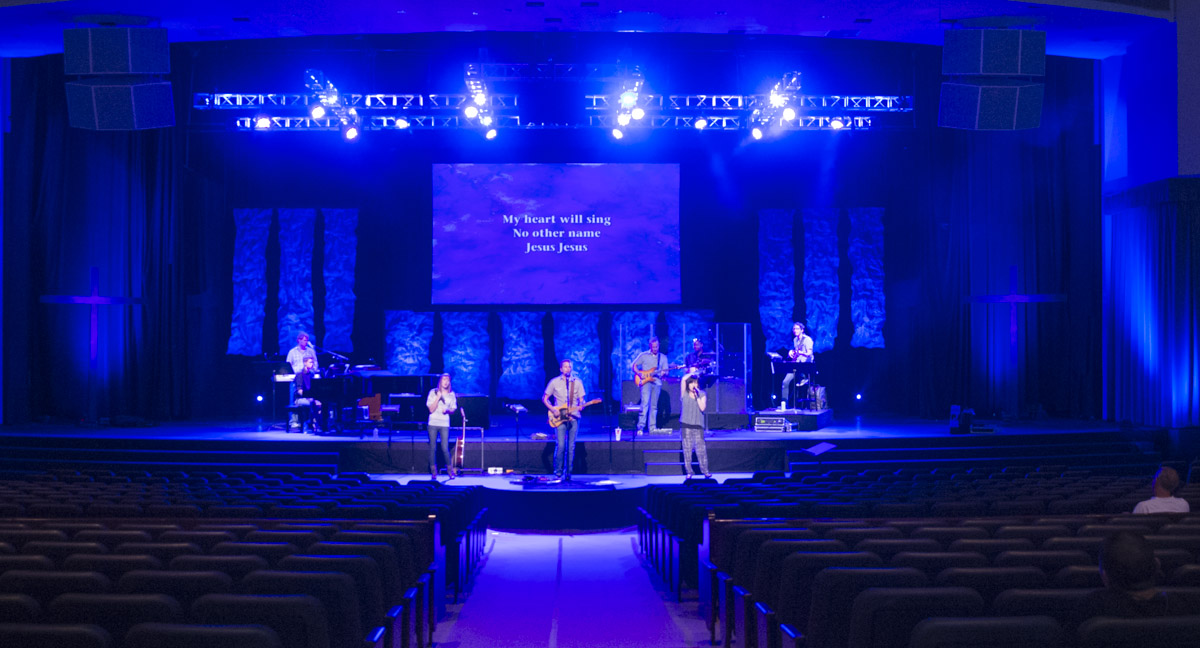 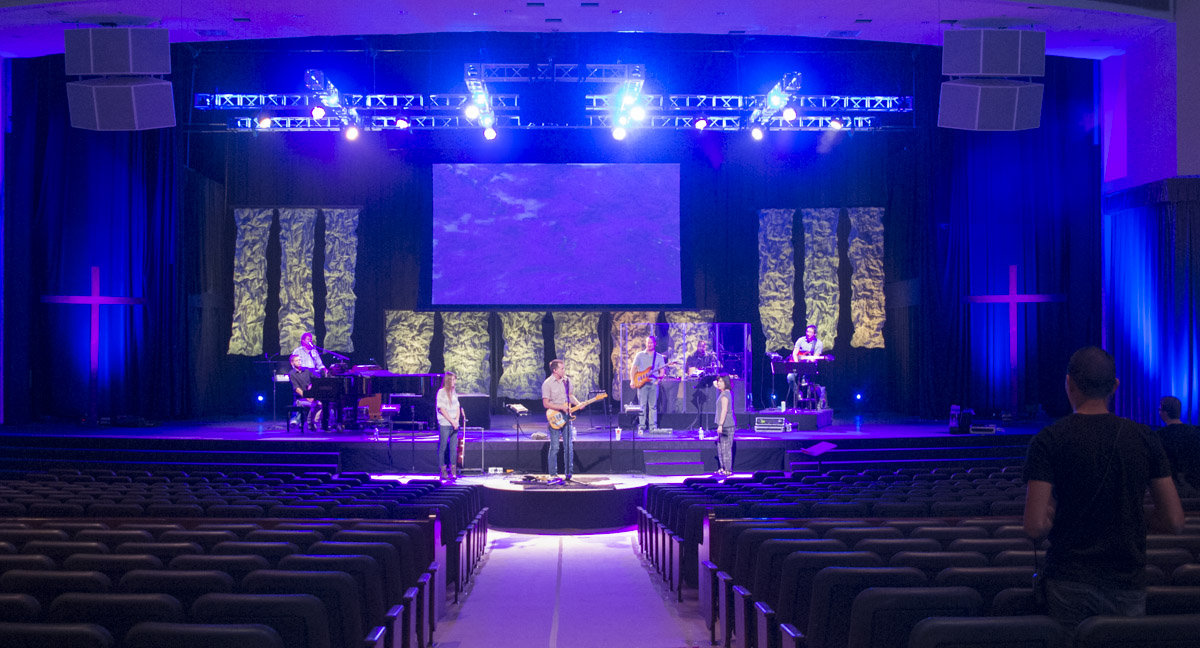 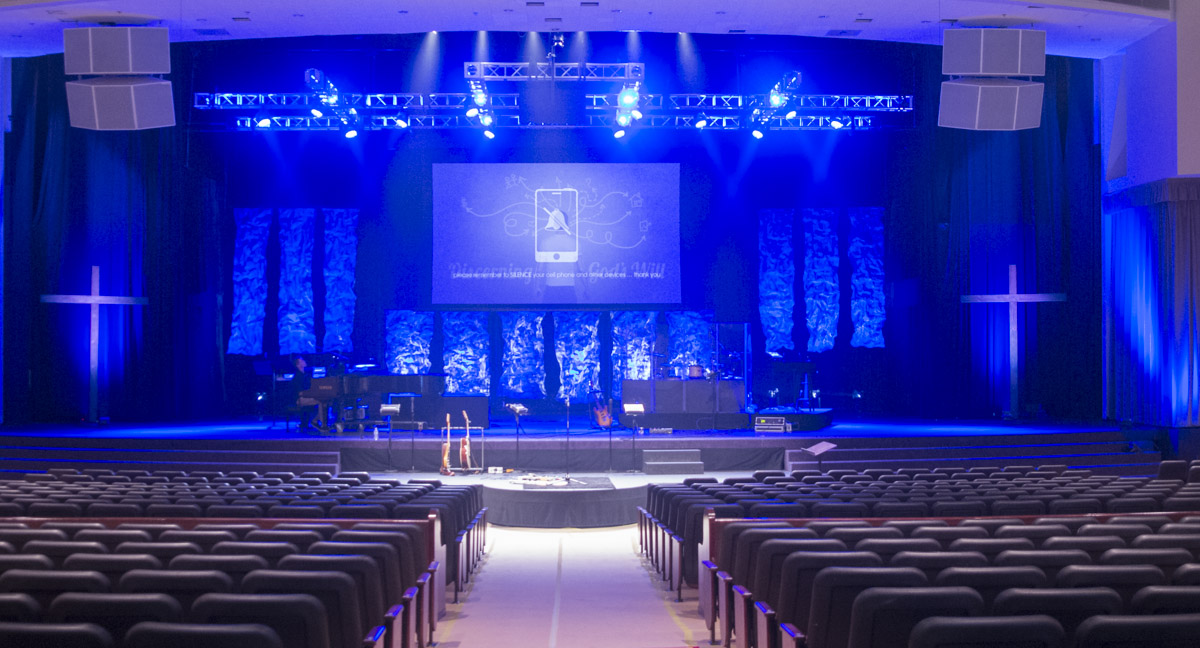 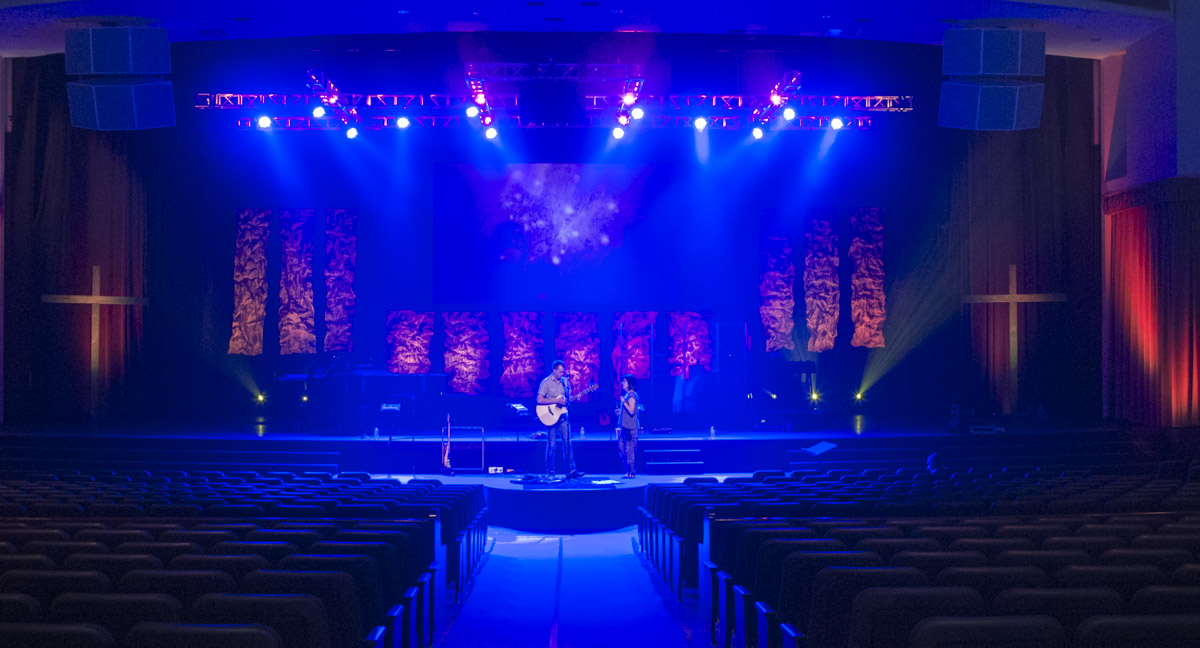 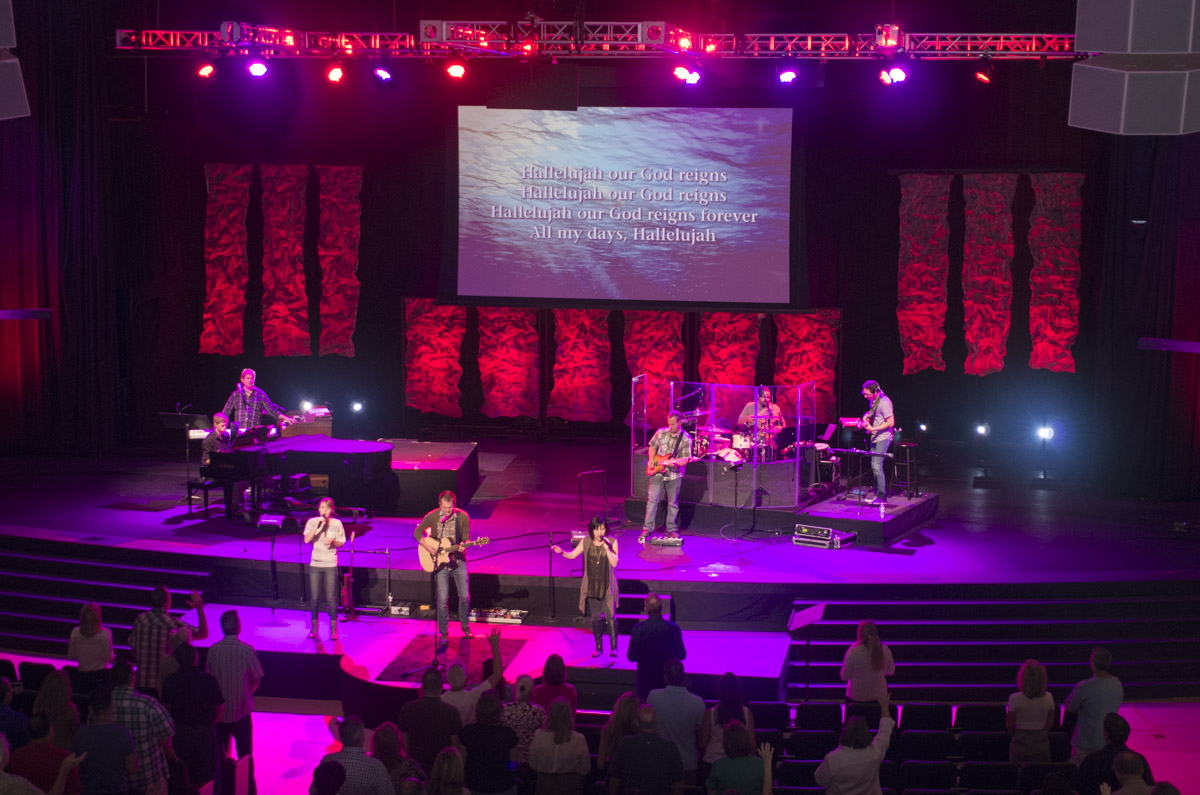 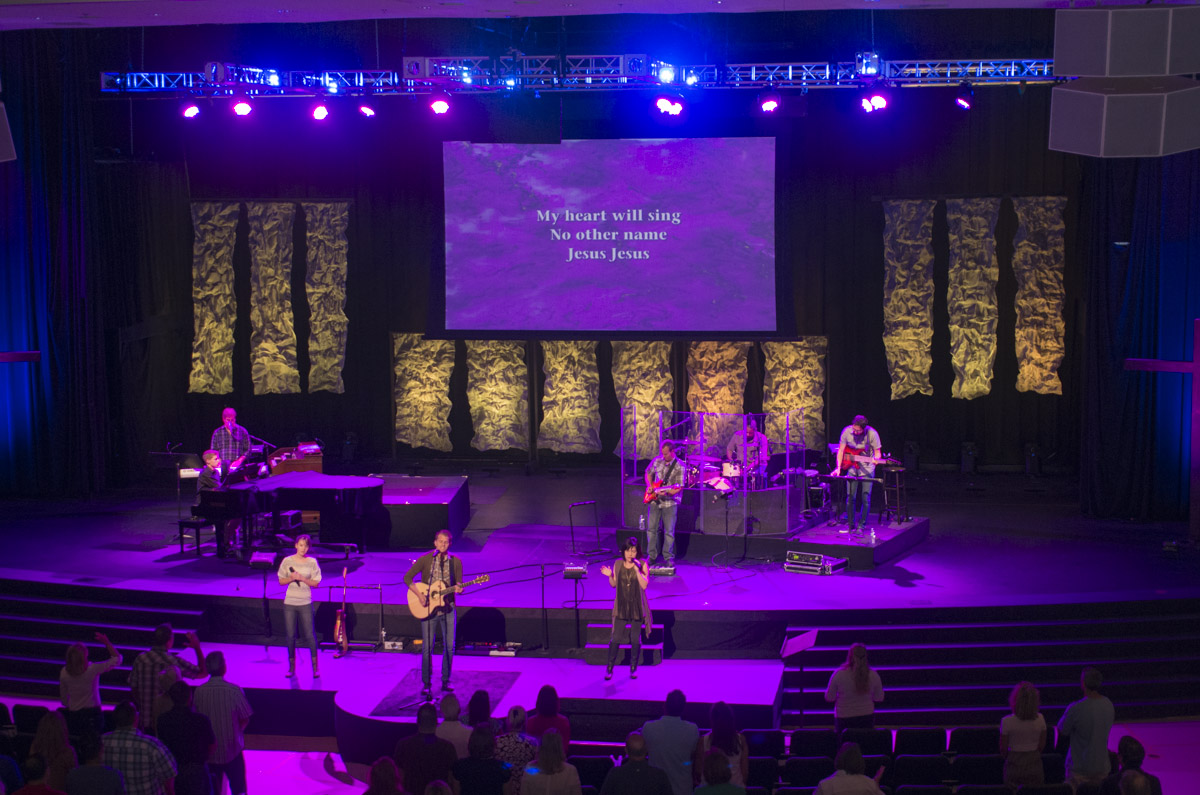 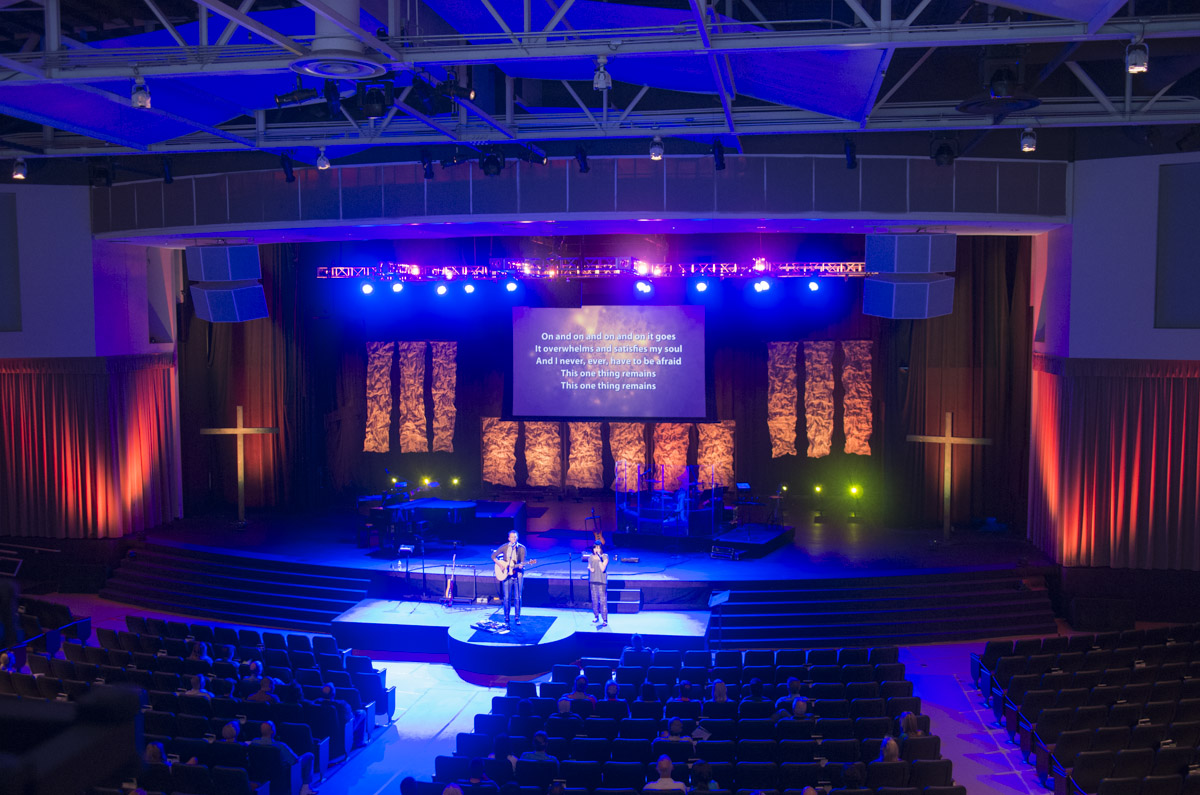 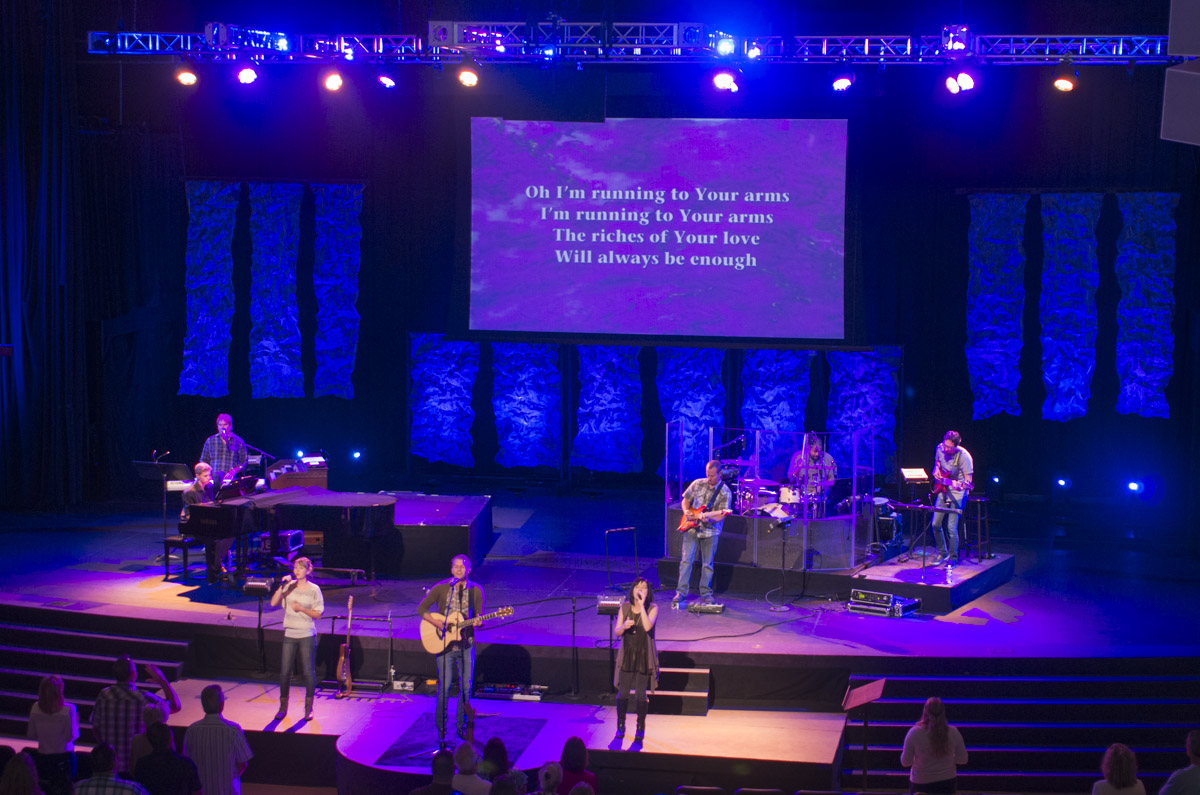 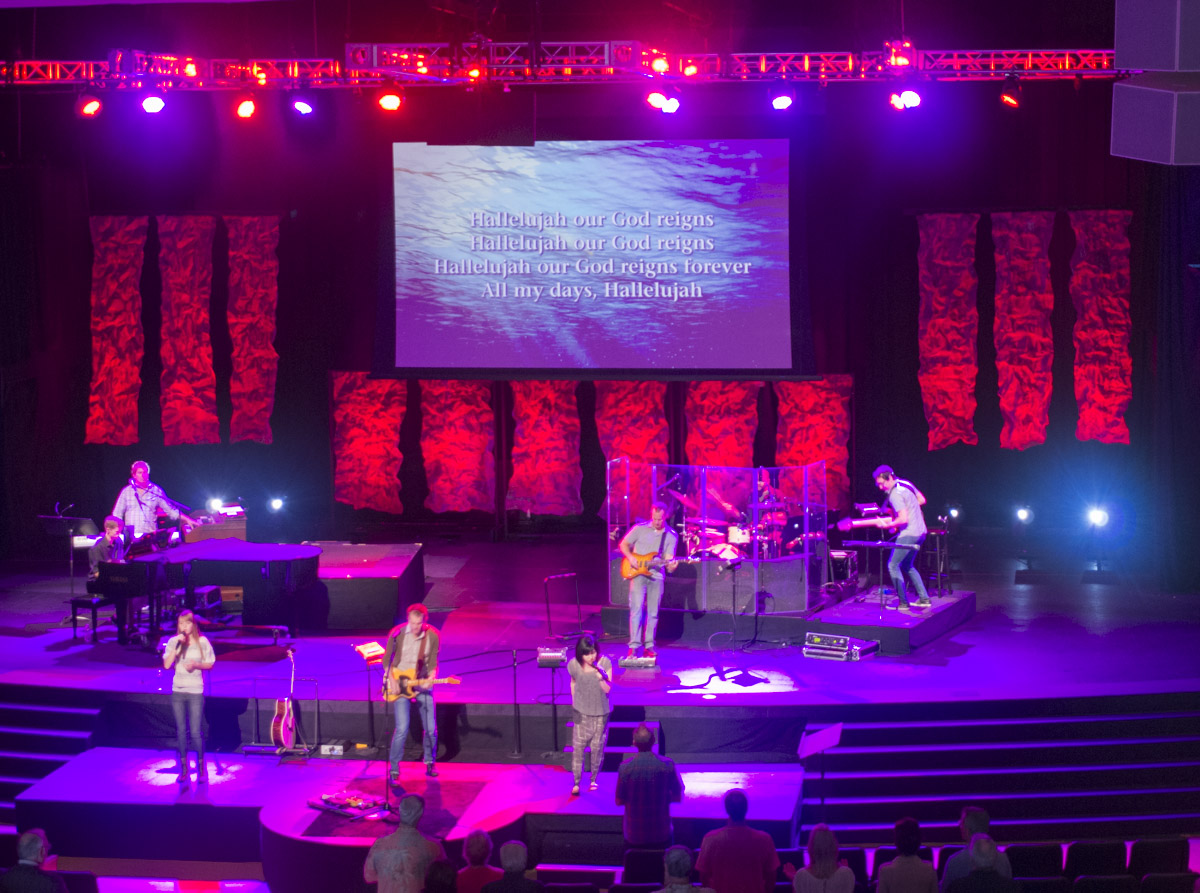 To say the change is dramatic is an understatement. As part of the rehang, we also pulled down the front valance curtain which exposes the truss and all the new truss warmers. That change alone makes it feel like a different room. As you can see from the pictures, the amount of color on the stage is truly dramatic.

The 518s are only a 250W fixture, and they just got washed out when we brought up the front light. The Studio Colors did a little better, being a 575W lamp, but once you dial in some deep color with the CMY mixing system, they ran out of gas. But the Impressions…Wow! We have found we’ll probably not even run them at 100% because they will start to overwhelm our front light.

The FlatPars make great truss warmers, though we had to get creative to mount them. C-Clamps didn’t work because we didn’t have the articulation in the arms to clamp to anything. As I was staring at it one day, I came up with the idea of using metal strapping bolted diagonally in the corner blocks as a mount. We tried one out and it worked great. We had to bore the holes out a bit for the truss bolts, but a 3/8” bolt holds the FlatPars with no issue.

Before the upgrade, we had six Studio Colors and six 518’s in the truss for color backlight. We replaced them with twelve Impressions, then added 18 truss warmers. We also have the eight side lights and some ground lights. Though we went about $1,000 over budget, we were able to replace six lights with thirty six! We moved the Studio Colors into the house to become moving front light as needed, and those are up for replacement in two years.

This is exactly what I was hoping for when I started the End of Life campaign. As technology gets better, we can afford to upgrade and improve the systems, often more than doubling our capacity for the same money. And no one argues with cost, because it’s all budgeted and saved for.

That’s our lighting upgrade; next time, I’ll talk about how we use our Hog 4 PC for control, making it easy for non-programmers to use.

Today’s post is brought to you by myMix. myMix is an intuitive, easy-to-use personal monitor mixing and multi-track recording system that puts each user in control of their own mix! myMix features two line-level balanced 1/4″ TRS outputs and one 1/8″ (3.5mm) headphone output, the ability to store up to 20 named profiles on each station, 4-band fully parametric stereo output EQ recording of up to 18 tracks plus stereo on an SD card. Learn more at myMixaudio.com