From time to time, people ask me where I come up with the ideas for our stage designs. I will let you in on a little secret—I’m not a stage designer. I’m not much of a designer of any kind, in fact. However, I have learned the art of adaptation. When I see a set idea I like, I catalog it for future reference, then figure out how to implement it. I’m a really good implementer. I’m not great at coming up with the initial design idea. But I’m really good at figuring out how to adapt it to our stage, build it with the time, money and tools we have available and work it in so it looks good. One has to play to one’s strengths…

This set is all fabric. We took various pieces of chiffon and stretched them all across the stage and lit it up. Though it was simple, it wasn’t easy to get it looking right. 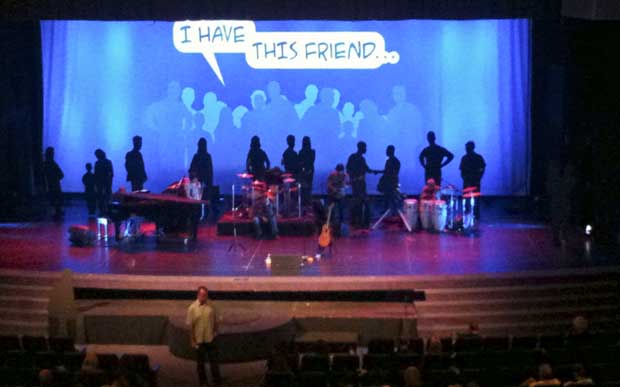 We hung our white cyc upstage, and a few helpers cut out silhouettes of people on black foam core. I built stands for them and suddenly, it was a set.

I got the inspiration for the block walls from Church On The Move. They did a similar block design, though we executed them very differently. 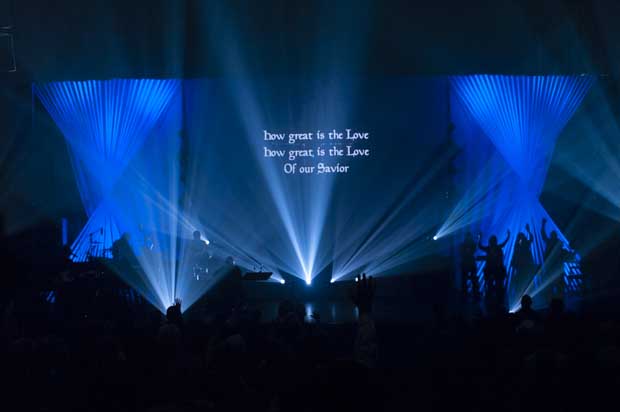 We grew tired of the chiffon, so we used white flagging tape from Grainger to create these helix-looking things. They take light quite well. 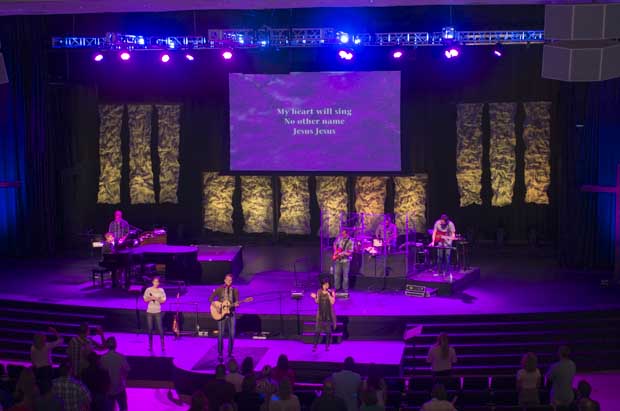 I saw an image of crumpled aluminum window screen somewhere and figured I could use it. I bought 3′ and 4′ rolls and made simple frames to hold them up. Total cost: under $200.

Where to Steal, er, Borrow Designs from?

For sure the best spot to grab ideas from is Church Stage Design Ideas. Long URL, lots of possibilities. I head over there a few times a year and look through the galleries. It’s not long before I have a few ideas that I like and that I think will work for our room. Sometimes, I combine ideas from two completely different sets—that’s OK!

Another thing I’ll do is watch video online of various churches around the country. Sometimes it can be hard to figure out exactly what the set is, but all I’m really going for is visual inspiration. I’ll figure out how to make it work. Going to conferences and simply visiting other churches is also a great way to get ideas.

This is the art of adaption, not copying. I know Steve Jobs once said, “Good artists copy, great artists steal.” That may work OK for Apple, but I prefer to adapt.

For example, for our Christmas set this year (pictures to come in an upcoming post), I’m borrowing ideas from (at least) three different sources. I found a design for “Christmas Trees” built out of pallets on CSDI; I’m finally implementing a lighting idea I picked up from Daniel Connell at Church on the Move (his Dewey’s), and I saw a light on the CMA awards that I liked, so I figured out how to build it (again, another post). These elements all work together well, and will feel similar to what we’ve done the last two years for Christmas Eve, but will look different.

What I’ve learned over the years is that I don’t have to come up with all the ideas; I simply figure out which ideas make sense for us at the time, and which ones work together. And often, my set bears only a passing resemblance to the one I borrowed because I really just went for the feel of it, not the exact implementation. In fact, that’s where I think this gets fun.

It Doesn’t Have to be Complicated

Sometimes I think we tend to get wrapped up in coming up with highly elaborate sets that would not be out of place in a Broadway play. While that’s certainly cool—and if you want to do that, go for it!—but it’s not necessary most times. Simple elements are often best, and I really like simple things that take light well. For example, our crumpled window screen set. I saw a picture of that somewhere (I think it was Duke’s presentation on stage design at Echo), and I mentally filed it away. A few months later, I needed to change our set, so I went to Home Depot, grabbed all the aluminum window screen they had in 3’ and 4’ rolls, and three of us built the set in about 3 hours. Total cost was about $125. It looks great live and on video, and we’ll keep this up for a while (though it is coming down for Christmas).

Some of the best stage sets are very simple in concept, but they are executed very well. And that’s what I strive for: Simple sets that take light well, that we can leave up for months at a time without them looking old. Hit those marks and you’re doing well.