As video resolutions go up, the files get larger. Larger files demand not only larger storage devices, but also faster ones. Having switched to 1080i video resolution last year, we’ve been struggling with the speed that FCPX handles it. Originally, I bought a 4-bay RAID 5 external drive that connects via eSATA. That certainly helped, but it still seemed that the thumbnails, waveforms and scrubbing was slower than it could be. I could switch to RAID 0, but the lack of safety scares me a bit.

I was experimenting at home with some video we shot at a trade show. I moved it between a USB 2.0 drive, a USB 3.0 drive and an SSD connected via USB 3.0. With every step up, the FCPX responded much better. Thumbnails generated quicker, and it was a lot easier to scrub and zoom in and out. So it occurred to me that this was all related to how fast FCP could read the data off the drive.

While I sat there watching the render progress bar slowly creep up one Sunday, I flipped through my email and saw one from OWC advertising their Accelsior PCI SSD. I had already read how much faster SSDs were when connected via PCI instead of a SATA bus (and it’s proven true with my new 13” MacBook Pro Retina), and figured the same would happen with the Accelsior.

According to the OWC website, the Accelsior—which is available in capacities of 120, 240, 480 and 960 GBs—can read at speeds up to 820 MB/s in PCs and 688 MB/s in Mac Pros. I launched Blackmagic Disk Speed test to see what my current set up was doing. The RAID 5 we have running was reading at around 238 MB/s. Some quick math showed that 688 is almost 3x 238, so I decided to take the plunge and order one.

The Accelsior is a simple PCIe card with two SandForce driven memory blades on it. The blades are replaceable, so if you want more capacity or if faster blades come out in the future, it’s a simple swap. The new version of the Accelsior also includes 2 eSATA ports on it, which is great as that let me ditch the eSATA card I had in the Mac. Genius.

Once it was installed and the Mac was closed back up (this took about 2 minutes), I fired up Disk Speed Test. I was initially disappointed to see write speeds come in at 222 MB/s, but then I recalled that write speed is not the primary goal or strength of this upgrade. Then the read speed came up. The needle swung all the way over to the red, pegged out. I saw read speeds of 611 MB/s! I couldn’t wait to try editing.

I copied a weekend capture file (we capture in ProRes 422LT, 1080i) over to the Accelsior and imported the clip into FCPX. I am used to it taking a while to generate thumbnails for the 85 minute file, but this was nearly instant. I dropped it on the timeline and again, huge speed gains for thumbnails and waveforms. Editing became very snappy, and I no longer felt I was waiting long times for the file to be updated.

We edit two versions of the service and this upgrade has easily shaved 10 minutes off my edit time. That might not seem like much but it’s really about 30%. Moreover, renders are much faster as well. Using Compressor, we render out both versions of the service to the Accelsior, and both are done hours earlier than they used to be. I used to dread editing the service because it felt like I was working in a vat of molasses. Now, it’s actually fun. I make decisions based on what is best for the project, not what will take less time. The only downside is that editing on my old 2009 MacBook Pro is now painful.

While not inexpensive, at $400 for the 240 GB version, it’s not outrageous. I had considered spending $500 for a Matrox Compress HD, but that would only speed up rendering. The Accelsior speeds up editing and render, so it’s a better deal. 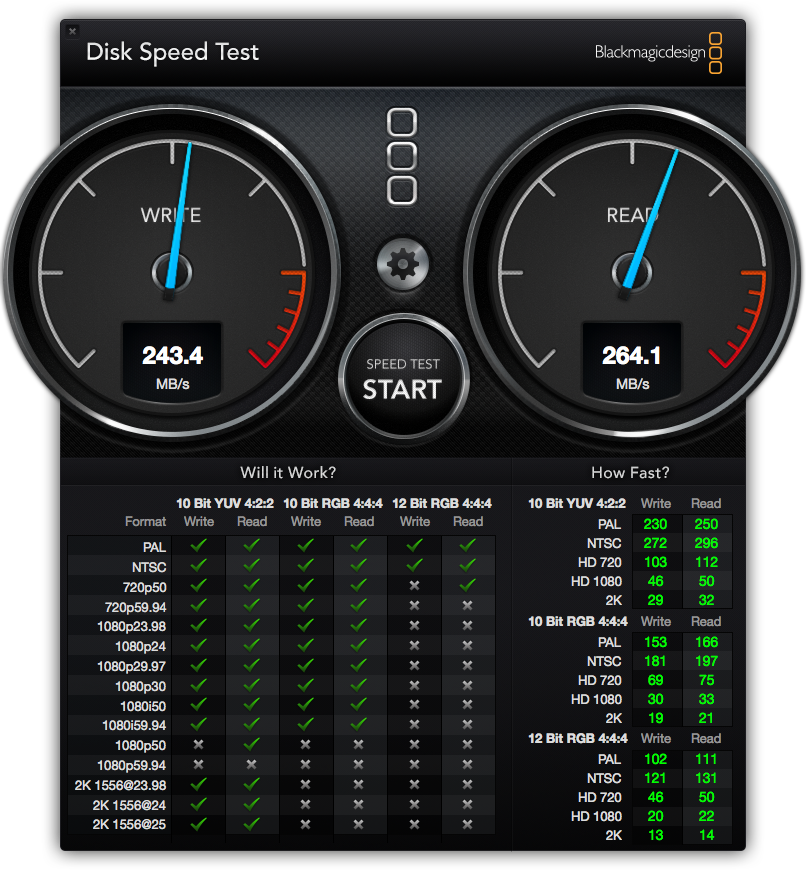 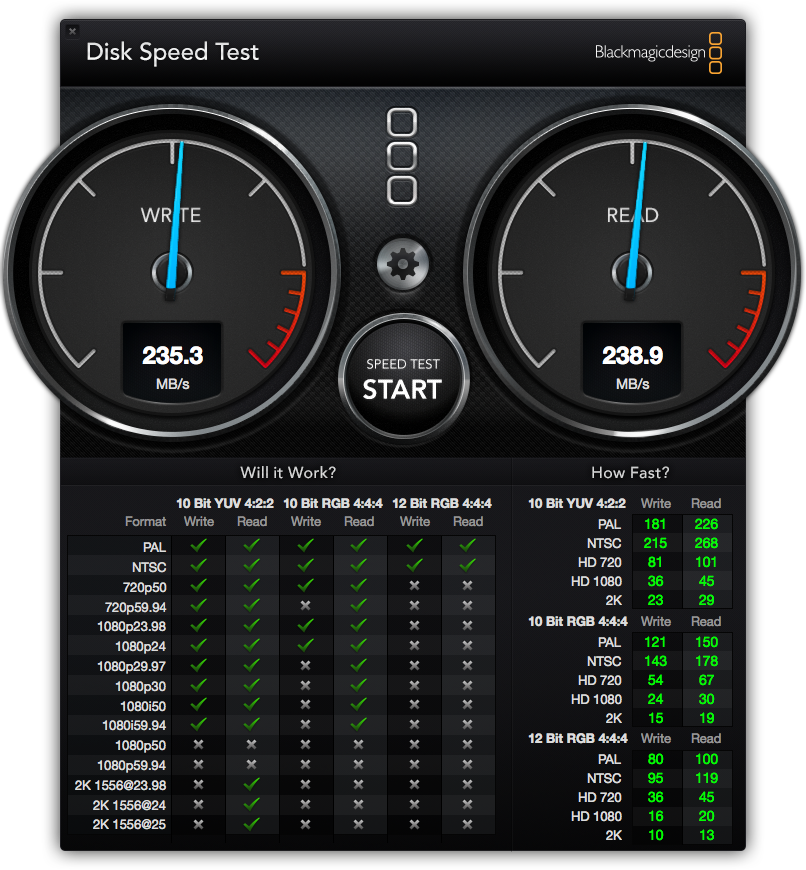 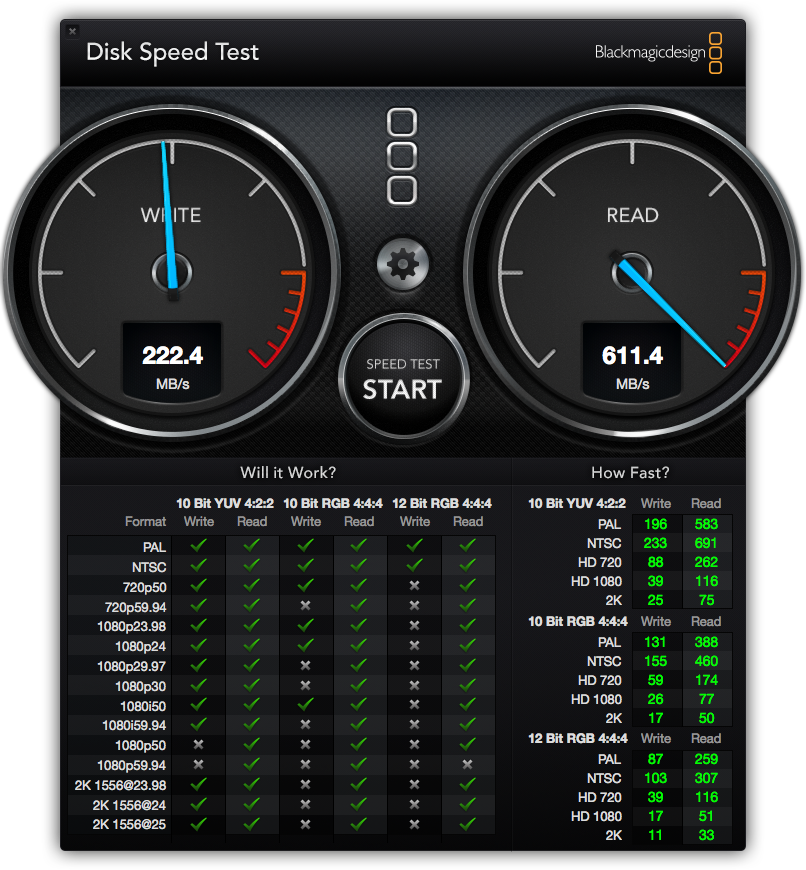 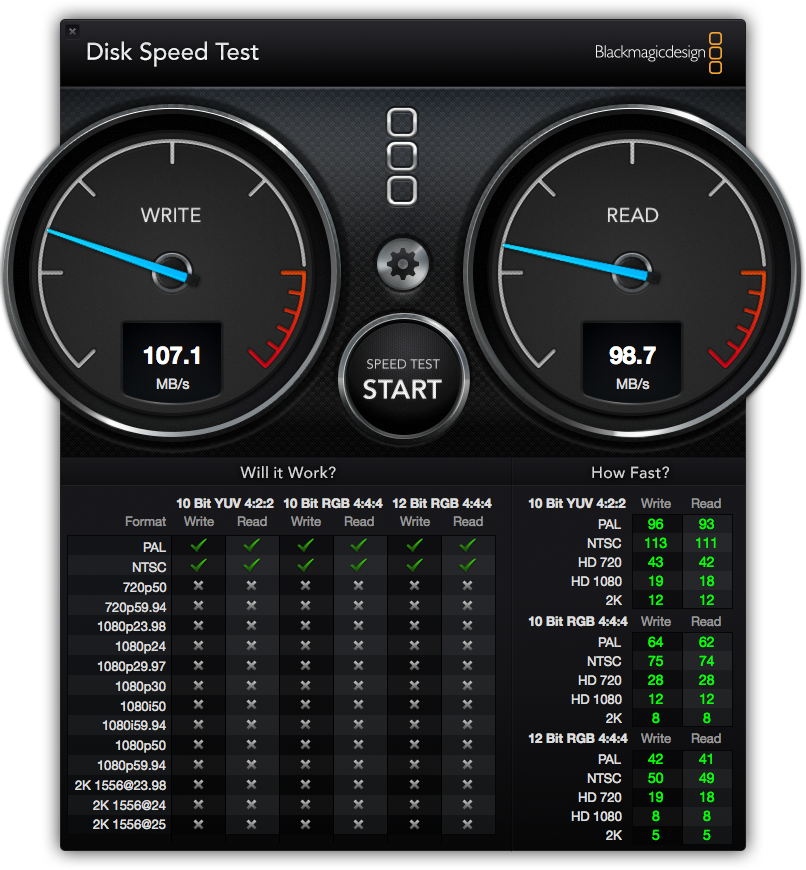 For reference, I decided to test read and write speeds of the internal 6G SSD (from OWC) we have in the Mac Pro, as well as the RAID 5, and the WD 1 TB spinning disk. Write speeds for the SSD, RAID and Accelsior are all in the low- to mid-200’s, but the read speed is where the Accelsior clearly wins. At 611 MB/s, it’s considerably faster than the SSD (264) or the RAID (238). The poor single disk reads and writes at 107 and 98 respectively.

It’s hard to find a reason not to love this upgrade. The only downside is the size. At 240 GB, it’s enough for us to capture both Sunday services (roughly 75 GB each), and render back both versions of the service (message only and full service). So each week, I use a program called Hazel to automatically move the render files off to a spinning disk (that gets backed up afterwards) and the capture files to the RAID 5. That way, we can keep 6-8 months of captured weekends online, and always be working on the fastest device.

If you’re looking for a way to speed up your FCPX workflow, and you have a MacPro (or a Thunderbolt-equipped Mac with a PCIe expansion chassis), give the Accelsior a shot.